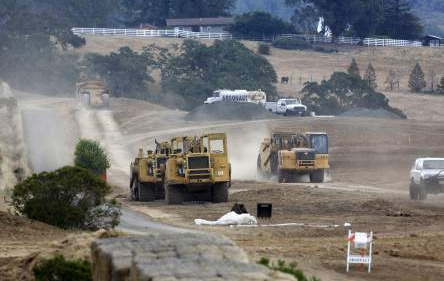 285 people have signed this petition. Add your name now!

As you read this, bulldozers are wreaking havoc on Stashak Canyon, a magical natural canyon and open space in East Santa Rosa.

The County of Sonoma is not simply allowing this destruction in the face of "long-cooled embers of opposition", as this poor treatment of the issue conveys (http://www.pressdemocrat.com/news/4010455-181/new-…), but in direct violation of multiple levels of LAW:

The current development includes the paving of 2 roads across a protected agricultural preserve, down steep slopes, through a grove of mature oaks, and bridging Austin Creek (all with NO ENVIRONMENTAL REVIEW). This is in direct violation of the California Conservation Act (Williamson Act).

A group of valiant neighbors took justice into their own hands, on their own time and dollar, to stop this project 10 years ago. Now the local community's interest are not being considered, and there has been no real opportunity for public input.

Irreparable damage to this magical place has no doubt already been done - in a secret and in-all-likelihood highly corrupt process. In light of this, THIS PETITION DEMANDS THE FOLLOWING:

A HALT TO CONSTRUCTION UNTIL:

1) THE ISSUE IS PROPERLY TREATED IN A PUBLIC FORUM

2) THE PROVISION OF THE FOLLOWING LEGAL DOCUMENTS, the existence of which is imperative for the project to go forward legally

-documentation of findings of compatibility with the Williamson Act and related due diligence done to minimize the negative impact on the protected preserve, including exploring alternative paths for these roads

This is hardly a "public improvement". Let it not go any further.

County Counsel Michael Gonga has just completed a thorough investigation into the existence of the legal documents the petition demanded.

The result? THEY DO NOT EXIST.

HOWEVER, we subsequently received word that, despite these clear legal infractions, the COUNTY WILL BE TAKING NO ACTION TO HALT THE ONGOING DESTRUCTION.

THIS COMMUNITY EFFORT NEEDS YOUR HELP. And here’s what you can do:

YOUR TIME, ENERGY, AND SUPPORT HAS BEEN HUGE SO FAR. PLEASE SUSTAIN UNTIL THE TRACTORS SHUT DOWN.