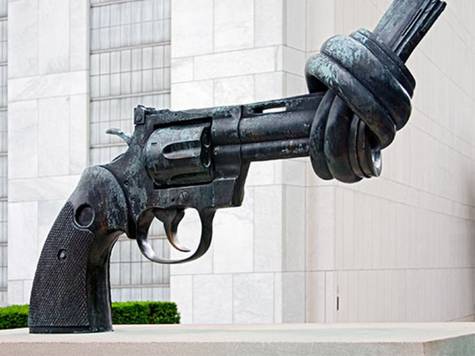 Gun ownership has created a massive problem in the United States of America. The results are staggering: In the first 9 months of 2015 alone, there have been nearly 40,000 deaths by gun violence, including homicide, suicide and accidents. At the time of the October 1 tragedy at a community college in Oregon, there had already been been 294 mass shootings in 2015 -- more than one per day.

Those are just a few of the sobering statistics. America has the highest rate of gun deaths of any developed nation, a rate worse than many poorer countries with less stable governments. It's long past time to change that.

Gun ownership is one of the biggest contributors to the violence. We no longer want to live in a state of fear. We no longer want kids to be taken from schools in body bags. Lawmakers have repeatedly failed us. We're taking matters into our own hands by making sure a gun is never in them.

Let's show the country and the world how many are willing to to swear off having these instruments of death in our own lives.

WE, THE UNDERSIGNED, PLEDGE TO NEVER PURCHASE OR OWN A GUN: