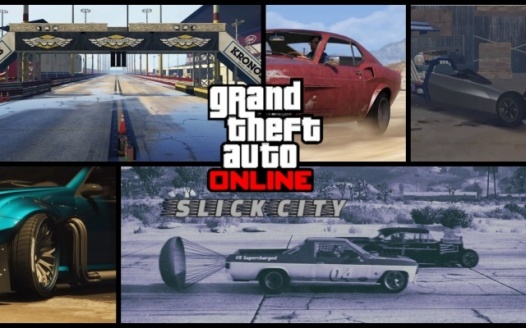 The slick city is a GTA 5 online DLC concept that takes place awhile after the Diamond casino and resort started having money problems due to the frequent heists and robberies starting to take place shortly after our characters set these changes into motion.

As the diamond casino slowly fails in business due to its premium insurance rates the people of San Andreas slowly looks for a better form of entertainment all eyes slowly drift to a new development out in grapeseed, a new company recently purchased a huge section of land and has been excavating and laying large strips of asphalt and cement.

The development started taking place near the old grapeseed airport, beside the airport there are two fields that an old farmer used to own after an accident the fields were then bought to be excavated for a new building and strip

Over a few weeks, grapeseed will go under a series of dramatic changes. First, there is an increase in construction equipment scattered around the fields ranging from excavators and bulldozers as the days go past slowly a track will start to form stretching across the two fields, slowly the stands, concrete barriers are transported inline the track, meanwhile slowly the construction of the garages and main building start.

After the completion of the drag strip, it started getting flood from spectators in search of a new form of entertainment. The Drag strip then put a workshop up for sale in Hope's of getting new drivers to help entertain their new crowd

The workshop comes with multiple default options ranging from the initial workshop to a small garage space but for money additional, you will be able to get the following modifications

Dyno - the Dyno is a purchasable upgrade that when used will tell you your vehicles top speed, 0 to 60, as well 0-100

The ticket/main building is connected to the Drag workshop this building contains a ticket booth for setting up races ( more on later) within this main building there is a VIP booth similar to the one found within the arena, there is also a display podium that has a fully modified drag car with racing slicks and a blower sitting in the center of the room.

The public racing is divided into classes based on the car you plan on racing the classes go as so small wheel, big wheel, nitrous oxide, dragster, funny car, and special that will include any vehicle with a rocket as well as collectible vehicles ( more on later)

There are two sections of the betting/ prize system cash and pinks, the cash system is the simplest system with a betting limit of 100 grand cash limit for betting all bets must be matched by the other competitors, the second section to the betting system is betting pink slips whereupon agreement of both parties you both put a car on the line, it does not have to be the vehicle you are racing.

Special - special vehicles consist of vehicles built with the intent to only be used on the strip they can, however, be used in free mode

The everyday cars consist of a car from all category's ranging from muscle to import, certain vehicles from the everyday category can be upgraded into the drag edition

The Drag edition of vehicles unlocks new upgrades that will be covered after the vehicles, these upgrades help boost speed, acceleration, and traction but with the downside of these vehicles tend to not be able to suffer as much damage and with the possibility to flip due to tires leaving the asphalt

Tier 5 upgrades - tier 5 upgrades were developed shortly after the drag strip became popular due to high demand for better performance - parts included in new tier 5 are engine, transmission, and breaks

Turbo MK.2 - probably designed by a speed junkie in his garage the turbo Mk.2 has recently hit the market helping vehicles with a dramatic acceleration boost

Parachute - on the first few opening days of the strip there was an increase in vehicles struggling to stop before the end of the strip so for drag editions car an optional parachute can be purchased triggered by the horn, the parachute will slow you down dramatically on both the land ( it may also slow your descent back to earth )

Nitrous oxide Mk.2 - After arena war slowly got less popular due to lack of contestants they sold their formula for nos over time it was improved to be more powerful it is now often used at the strips or for street racers


Across the map is a few carcasses of racing legends abandoned or destroyed from time, the owner of the strip explains that these vehicles and original parts are somewhere in San Andreas mostly parted out he gives you a list of vehicles and wishing you luck that you may one day bring them back to the glory

Embroidered hoodies - plan hoodies with designs on the back ex.skulls, logos, etc

With the release of the slick city some new emotes will be released according to the style of the update, included in these emotes are

Wrench toss - casually tosses a wrench into the air