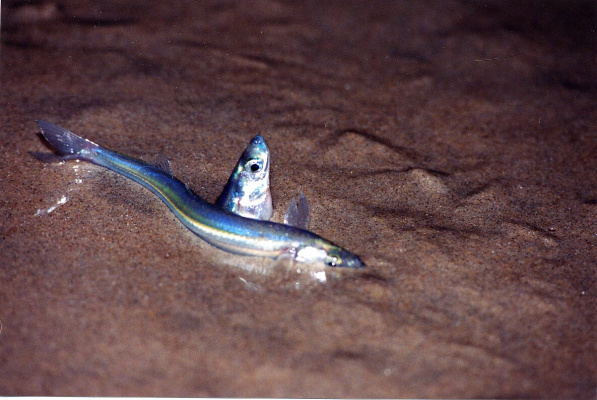 Grunion are small fish found only in California and Baja that are known for their spectacular spawning behavior as they come completely out of the water on sandy beaches during certain spring and summer nights. However, this behavior leaves them extremely vulnerable during the months when fishing is permitted. In addition to that, their habitat is shrinking due to sea level rise and coastal development.

In 1927 the months of April, May and June were designated by the CA Department of Fish and Game (now the CA Department of Fish and Wildlife) as closed to fishing to protect the species during their peak spawning season. In 1949, the month of June was removed from closure leaving only April and May protected. Since 2002 thousands of volunteer citizen scientists, the "Grunion Greeters", reported observations from spawning nights in part to assess the health of the species. Unfortunately the data show a decline in population causing significant concern for the future of this iconic fish.

We propose increasing protection by returning to the original closure for June in southern California, and through August for beaches north of Pt. Conception because the runs occur later there. Also, currently their is no limit on how many fish are allowed to be taken, so we propose adding a "bag limit" of 10 fish.

Read more information about the species and this issue here.