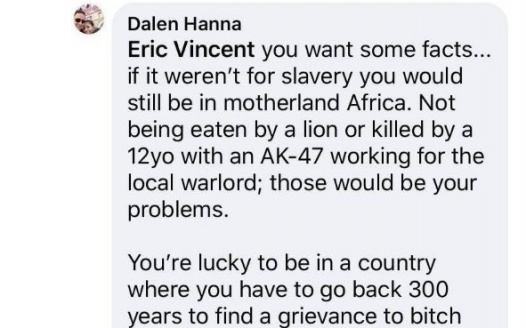 Chaldeans For Progress 0 Comments
47 people have signed. Add your voice!
5%

TO the Attorney Grievance Commission of the State of Michigan:

We, the undersigned, would like to bring to your attention the racist and derogatory remarks made by Attorney Dalen Hanna via Facebook on June 26th, 2020. During a political exchange with Eric Vincent, Dalen Hanna said the following "you want some facts... if it weren't for slavery you would still be in motherland Africa. Not being eaten by a lion or killed by a 12yo with an AK-47 working for the local warlord, those would be your problems. You're lucky to be in a country where you have to go back 300 years to find a grievance to bitch about."

We, as members of the public, express horror and disgust at these remarks. We demand that this individual be investigated, as not only has he contributed publicly to the disgusting forces of racial discrimination, but it also allows the question to easily arise: how had/have/will these biases affect the way he represents his clients in a court of law, where important decisions are made that impact the livelihood of individuals.