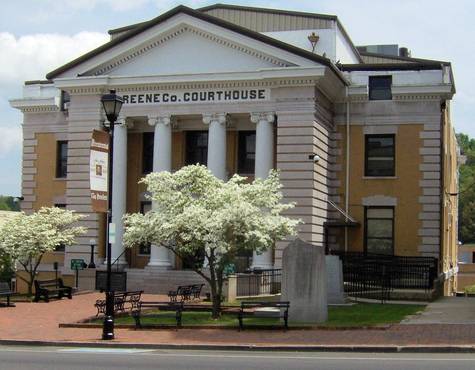 Greene County, TN: Keep the Confederate Flag Off the Courthouse!

On Monday, October 19, 2015, the Greene County Commission will vote on a resolution to display the Confederate battle flag on the courthouse grounds. This motion, proposed by commissioner James “Buddy” Randolph, would have the Confederate flag take up an equal position alongside the American flag and state flag of Tennessee.

As concerned citizens, I urge you to speak out against Randolph's resolution. Take a stand for civil rights, social justice, and racial inclusion – don’t let a symbol of hate fly at a government building in Greene County, Tennessee!

More information: "Tennessee Official Explains Why He Wants to Bring Back Confederate Flag"

Here are three reasons why you should fight to keep the Confederate flag away from the courthouse.

1.) East Tennessee, Once Known as "Switzerland of America," was Mostly Pro-Union:

Commissioner Randolph has claimed the flag is an important part of our region’s heritage. At the outset of the Civil War, however, an overwhelming majority of East Tennessee's population rejected the Confederacy.

In 1861, as Middle and West Tennessee opted to secede, Greeneville became the epicenter of an astounding surge in pro-union activism. On June 17, inside the Greene County courthouse, the East Tennessee Convention gathered to draft a request to remain tied to the north. Their plea was declined. And, for the next four years, Confederate forces were garrisoned in towns and cities across the eastern half of Tennessee.

If Old Glory is unfurled in Greeneville, it would honor the memory of the invasion and subsequent occupation of East Tennessee by the Confederacy. Is that a heritage we want to celebrate?

2.) The Confederate Flag is a Logo for Hate Groups:

The Confederate flag, prior the rise of modern white supremacist organizations, was often evoked to commemorate soldiers who died in battle.

Nevertheless, by the mid-twentieth century, the flag had shifted firmly into the territory of hate groups.

The Ku Klux Klan, for example, began to place a renewed emphasis on the flag in the fifties and sixties, largely in defiance of federal desegregation.

Similarly, in 1948, the flag became a symbol of the States' Rights Democratic Party (the "Dixiecrats"), a breakaway faction of the Democratic Party formed to oppose the civil rights movement.

More recently, when a young white gunman killed nine people at a historically black church in Charleston, South Carolina, he was photographed holding a Confederate flag on his website.

It is difficult to remove the "stars and bars" from its controversial historical and political background. For the last one hundred and fifty years, the flag has been consistently connected to a politics of extreme prejudice and senseless, racially motivated violence. Is this an ideology we want to confer status to at our courthouse?

More information: "The Complicated Political History of the Confederate Flag"

3.) The Courthouse is a Public Institution Where Everyone Should Feel Safe:

While it's legal for one to display a Confederate flag at home or in public, it's an absolute disgrace for a court of law to fly the flag on its premises.

The courthouse is a center that must treat everyone – regardless of race, religion, gender, and income – with the respect and dignity they deserve.

To many, the flag radiates an aura of racial bias. It shocks. It intimidates. And, if placed at the doorstep of a public institution, it makes people of color (like myself) feel as though officials perceive them as less than fully human.

We are better than this, Greene County. Stop Randolph's Resolution. Raise Your Voice, Block the Flag.