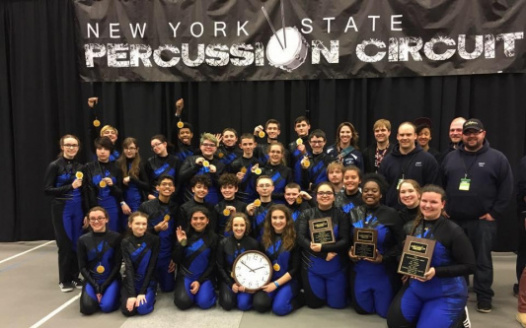 Since 2012, I’ve witnessed the East Irondequoit Indoor Percussion Ensemble progress and have watched it grow from all kinds of levels of success. The most recent few years the ensemble has achieved an impressively successful amount of recognition in the state circuit. The ensemble recently in 2017, with their production of “Time”, became “PSA” -class gold champions, scoring highest of multiple other groups across the state, taking home several plaques, and gold medals. In 2018, the ensemble placed second place, taking silver in the state championship and also brought home a plaque with a lot of achievement. The “EI parents for music” Program has done more than their part to support the ensemble in the past years, and have done a tremendous amount of work helping the ensemble get the materials they need to achieve the success they have. Though, one thing that our group could deserve, is a banner located in the “Al Masino court”, also known as the “Eastridge Varsity Gym.” Located in this gymnasium are banners across the side and back walls recognizing sports teams, such as, gymnastics, soccer, cross country, tennis, football, wrestling, cheerleading, ETC. The East Irondequoit Indoor Percussion ensemble has brought home, a very large amount of trophies, medals, and plaques home in the past few years, especially at state championships. I believe that the ensemble should be granted the recognition of their hard work by having a banner created for the group because they aren’t granted anywhere in the school to display a recognition of their success and achievement of hard work. A banner in the varsity gym along the wall with these banners could recognize the achievements at state championships, and regionals that the ensemble has traveled out of state to compete at. Not many students even know what the ensemble is about. If the group has a display of recognition of success, more students, staff, faculty, or public citizens would be able to see the success and pride the ensemble has gained. The 2019 season, entitled, “Peace By Piece” has already brought tears across its performances this season to people all across the state, and believe it or not, even in other places of the country. Students who witness this banner could be inspired to join a group such as this ensemble if they were able to see what the group has been able to accomplish, because it could inspire others to join this journey too. The percussion ensemble has worked an excessive amount multiple hours a week, for 6 months straight in the year, and are not granted much recognition in the school, except for E-Stickers, that don’t explain to the public eye, “This is for winning a state championship”. Bringing a banner to the gym under the East Irondequoit Indoor Percussion Ensemble, would bring pride of the district and recognition to the group for their unending success and achievements they strive to make each season.