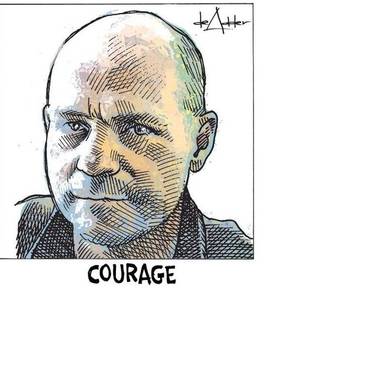 Gordon Downie for Rock and Roll Hall of Fame

On Tuesday, May 24th, 2016, it was announced by the Tragically Hip that their front man Gordon Downie was diagnosed with terminal brain cancer, and though he is "fighting hard", the outlook looks grim. It is safe to say that in a consistently amazing musical career spanning three decades, Gord and the boys solidified themselves as one of the strongest voices of Canadian culture and pride in the music world, as well as an immovable force of musical ingenuity and general rock and roll bad assery. Regrettably, the brilliant innovations of this powerhouse outfit may not continue, though their music is timeless, as is the influences they have had on other artist, in Canada and abroad. It is commonplace to only fully credit the actions of great artists after they have gone, but in this one instance, we may have a chance to show Gord our love and recognition in one of its most ultimate forms before he takes the leap into the great beyond. All Canadian patriotic rhetoric aside, the Tragically Hip have solidified themselves in history as one of the greatest rock bands of all time, and now, in the face of oblivion, the man refuses to slip quietly into the night, instead planning one final tour, the great one. This is the mark of a true rock, indeed a true music legend. Let's honour him while he is still with us by inducting the Tragically Hip into the Rock and Roll Hall of Fame. While a mere gesture in the face of such a terrifying reality, it is unquestionably a deserved title. Have Courage for Gord. Sign this petition.