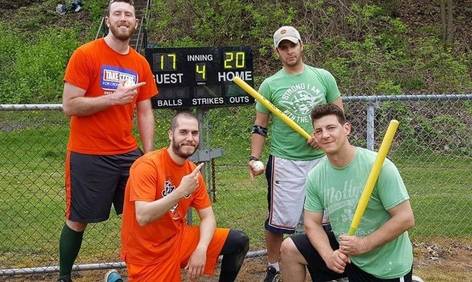 535 people have signed this petition. Add your name now!

Residents of Glenville and Scotia NY, we are collecting signatures to support backyard sports in Glenville.

Chris Hess, a resident of Glenville, formed a wiffle ball league in 2005. His 0.34 acre lot on Cherry Lane barely contained the field, but there were no complaints from neighbors. In 2015, Chris and his wife relocated to a 10 acre property in West Glenville so they could have enough space to use their backyard.

Around this time, the opening of a Glenville zip line course (Mountain Ridge Adventure) was in the news. The town placed a moratorium on future recreational facilities to preserve the rural nature of the town.

In May of 2016, a neighbor issued a complaint to the town about the wiffle ball games. The town informed Chris that his field was considered a recreational facility, and required a permit. Seeking to comply with the town, he attempted to apply for a site plan. However, because the moratorium was in place, he was unable to do so.

The location of his new field is well over 250 feet from the nearest neighbor, and is hidden behind a dense row of forest. They planned to host wiffle ball games on Saturday mornings (three players per team), starting in May and ending in August.

The vague language in the moratorium includes any Glenville resident with a structure that facilitates ball play. Technically, anyone with a basketball hoop, volleyball net, ice rink, soccer goal, etc., that plays at a scheduled time would fall into this category. This would require anyone who falls under this rule to submit to the town for a permit and site plan review. It only took one complaint to force Chris to defend himself in front of the town hall.

Chris submitted a waiver to be excluded from the moratorium. The town needs to hear from its residents to allow him to resume games in his back yard.

By signing the petition below, you are stating that you believe that this is an asset to the community and it does not take away from the rural nature of the town.