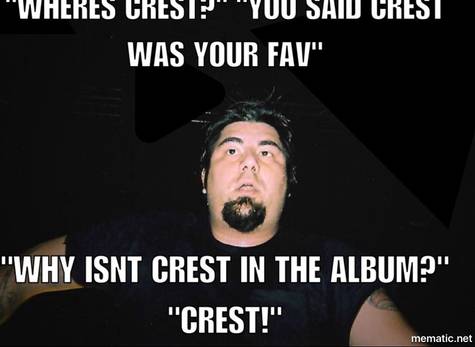 The amazing band Deftones has pulled out another amazing album titled Gore. But once again, they decide to pull songs that were meant to be in the album, disappointing true fans once again. Its time for a Change (no pun intended) Im tired of Deftones making poor decisions like this, we waited 4 years for this album and not only that but this new album is AMAZING, i could only imagine how great Crest is. Also, the album was delayed like TWICE! The least you could do is give us Crest as a downloadable track, or even better, a new B-Sides that has every unreleased track that you guys never gave us, and yes im also talking about those disco covers yall promised us for Koi No Yokan. Listen to the fans Deftones, especially you Chino, give us Crest... Please