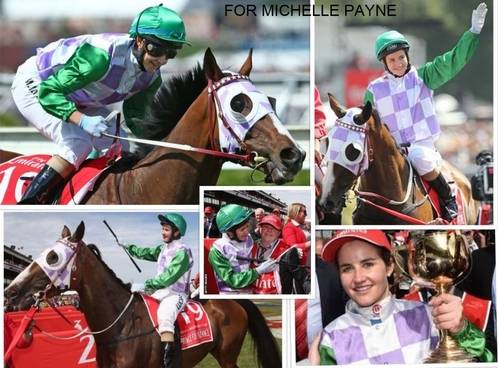 Give Michelle Payne Her Ride Back

I am making this Petition, to make a stand for Michelle Payne and other jockeys that have been in the same place as her.

For people that don't know, Michelle Payne Made HISTORY in the 2015 By being the first woman to win Melbourne Cup. She won the cup Aboard Prince Of Penzance, At $101 to 1 Odds. She showed the world that a Woman can ride just as good as men. The training strategy she used in the lead-up to the race included a focus on galloping, and a consistent horse-jockey relationship. "...'you know what?' Payne asked. "It's not all about strength, there is so much more involved, getting the horse to try for you, it's being patient."

Michelle Payne Is youngest daughter of Paddy and Mary Payne. Her mother Mary died in a motor vehicle crash when Payne was six months old, leaving her father Paddy to raise their ten children as a single father. Payne dreamt of being a winning jockey as a child, and, aged seven, told friends she would one day win the Melbourne Cup.

In March 2004,Michelle Payne fell heavily at a race in Sandown Racecourse in Melbourne, fracturing her skull and bruising her brain. She Returned back to race riding.

In May 2016, Payne suffered severe abdominal injuries in a race fall at Mildura. She underwent urgent surgery for a torn pancreas, which resulted in her losing part of it.

But Michelle Payne is determent to ride again. After Spending nearly a month in hospital. Michelle Payne started her comeback. She started riding track work for her Brother, And Darren Weir. To help her get back to race fitness. She has been working with Prince Of Penzance for a long time. Having ridden the gelding 24 times out of his 25 starts. She has done 99% if not all of Prince of Penzance Track Gallops. She has formed a Strong bond with him. Loving him as if he was her own horse.

A Jockey Life isn't easy. They start work Early in the morning (4am) Some go from stable to stable to earn the rights to ride on horses for the races. They also have to control their diets to keep at low weight. With sets weights as low as 54kg. They travel from morning work to Races to ride. They have to keep fit. They put their lives at risk, knowing that one ride fall can result in life injuries even death. But without jockeys The racing world wouldn't be able to go on. And yet they still rides everyday,

So lets Make a Stand. Not just for Michelle Payne but for Jockeys around the world, that have has the same thing happen to them.

Thank You for reading this.