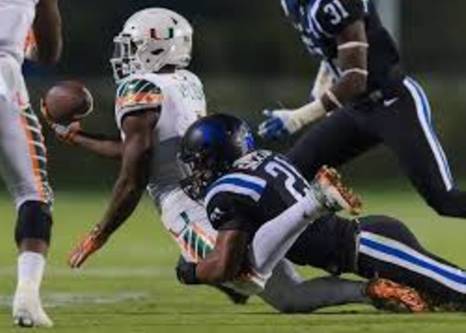 Give Duke the Win

292 people have signed this petition. Add your name now!

On October 31st, the Duke Blue Devils faced the Miami Hurricanes in Durham, North Carolina. The Blue Devils scored a go-ahead touchdown with 6 seconds remaining, to make the score 27-24. Then, Duke was the victim of an incorrect call, which resulted in a Miami victory.

On the final play, Miami fielded the kickoff, made 8 laterals, and scored a touchdown. Initially the play was called back because of an illegal block in the back. The play was reviewed, and even though it was obvious that a Miami ball carrier's knee was down, the refs said it was not. The flag was picked up, and the outcome of the game was wrongly changed, resulting in a 30-27 Miami victory.

On November 1st, the ACC made a statement that the refs were incorrect with their ruling, and incorrect in picking up the flag. The refs from that game were suspended by the ACC. Because of an NCAA rule, it is not legal to give the victory to Duke, even though it is unanimously known that the wrong call was made, and the result was changed by it. The only way to make things right would be for Miami to forfeit the game. This ACC matchup has major ACC implications, and hurts the Duke team, even though they rightfully won the game. Signing this petition shows your support for Miami to forfiet this win to Duke.