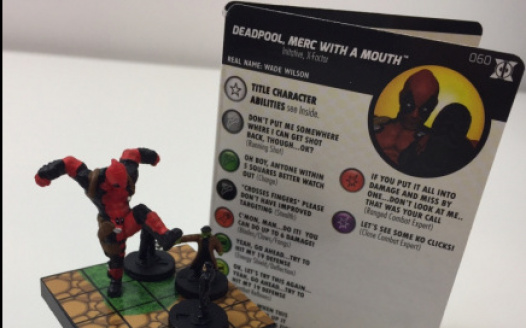 Give Deadpool, Merc with a Mouth the right keywords!

The Deadpool & the X-Force set is a few months old now and we've seen very little errata for the set.

The SR Title Character, Deadpool, Merc with a Mouth, is in desperate need for errata. He currently has "Initiative, X-Factor" and shares the same date and significant appearance as the figure that appears before him, Wiz Kid. Deadpool was on neither of those teams and, as the quintessential Deadpool figure, could have all sorts of keywords from Avengers to S.H.I.E.L.D. to X-Force, not to mention Martial Artist, Soldier, and other generic keywords. (Though as stated on reddit, Assassin and X-Force would be perfect.)

As anyone who plays this game would know, this drastically hampers the effectiveness of what would otherwise be a really awesome figure to use. All it would take is something as simple as posting a keyword update on their WizKids Info Network's.

We're not asking for reprinted cards, we just want to use this figure to the best of it's abilities.