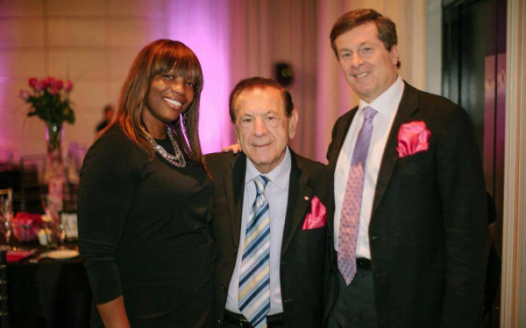 We have received just over 90 signatures online. Thank you all for supporting us! Aside from this website we have also been collecting signatures on paper petitions, and we are now well over the number of names needed to make this happen!

Gino has asked me to send his thanks to everyone for your kindness and words of support. This means so much to him (and to me) :)

Please sign this petition to help us rename the laneway behind 1282-1310 St Clair Ave W in Toronto to "Cav. Gino L. Cucchi Laneway".

Gino Cucchi immigrated to Canada from Italy in the summer of 1958. His first job was with a clothing manufacturing company, but he had always dreamed of owning his own clothing store. In 1973 Gino opened "Gino Men and Boys Fashions" which became an important fixture in the Italian Canadian community in Toronto.

Since then, Gino has been an active member of the St Clair community. He spearheaded the formation of the Corso Italia Business Improvement Association in 1984, and provided professional business leadership support to new business owners. He was an active member of the Corso Italia BIA from 1979 to 2004. Currently he rents his properties on St Clair West to other business owners, who he frequently assists with their own professional ambitions.

In terms of accomplishments outside of the business world, Gino has held dozens of fundraising dinners in honour of The Canadian Cancer Society, The Hospital for Sick Children, the Thalassemia Association, and, most recently, the After Breast Cancer Society. He has also been involved with international fundraising to provide support to peoples in Uganda, Ghana, and Mexico.

Since 1995, Gino has hosted "Edizione Speciale", his weekly program on CHIN radio.

In 1998 he co-founded the installation of The Monument of Italian Immigrants at Joseph J. Piccininni Community Centre, which led to the publication of "A Monument for Italian-Canadian Immigrants" through the University of Toronto, in 1999.

45 years of community service provides us with more than enough material to prove why Gino L. Cucchi deserves a laneway in his name, but below we would like to highlight a few more:

Aside from all of the above, Gino is an amazing husband, father, and grandfather. He has always put family first, and so we would like to thank him in the best ways we can.

We hope it's become obvious to you why we want to honour Gino in this way. Please help us dedicate to Gino Cucchi a piece of Toronto, a piece of his home, to thank him for his life's work.

Thank you greatly for your participation and support.