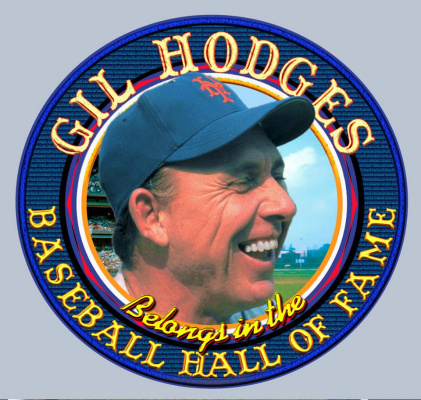 Gil Hodges Belongs in the Baseball Hall of Fame

We support the election of Gil Hodges to the Baseball Hall of Fame. He is fully qualified under every one of the criteria set forth in the Hall’s own rules:

“Voting shall be based on player's record, playing ability, integrity, sportsmanship, character, and contributions to the team(s) on which the player played.”

Gil Hodges was the premier first baseman in the National League during the Golden Era. He was an outstanding fielder, winning the first three Gold Gloves ever awarded in his final three seasons as a full-time regular. He was a dominant power hitter, topping twenty home runs for eleven consecutive seasons, and he totaled thirty or more homers in six of those years. He was an eight-time All Star. His on-the-field performance was a major factor in seven pennants and two World Championships during his fourteen seasons with the Brooklyn and Los Angeles Dodgers. He was second in both home runs and runs batted in for the National League during the 1950s, was tenth on the all-time home run list at the close of his final full season, and in third place among right-handed batters.

His career totals might have been even more impressive had he not spent three years in the Pacific with the U.S. Marines during World War II, where he earned the Bronze Star, which is awarded for acts of heroism or meritorious service in a combat zone.

Integrity, sportsmanship and character may be hard to quantify, but Hodges displayed these qualities in abundance. As both a player and manager, he won the universal respect of his teammates, the players he managed, opponents and fans. He was widely recognized as the only player never to be booed in Brooklyn. Hodges made his home in the heart of the community where he played and he was extremely generous with his time, showing a special dedication to youth. Jackie Robinson credited him as a key figure in easing his difficult role as the first African-American in the major leagues in the 20th century. As a first-time manager, Hodges dramatically improved the performance of the expansion Washington Senators. When he returned to New York as manager of the Mets, he brought 25 young men together as a unit that accomplished one of the most improbable and best remembered feats in baseball history: the 1969 World Series title.

His untimely death at age 47 in 1972 robbed baseball and its fans of many more years of his great skills and character. His reputation had endured and grown in the decades since that loss. He has earned one distinction his generations of admirers would dearly love to see become a historic footnote--accumulating more votes than any candidate not yet enshrined in the Hall. His achievements during the quarter-century he did spend in the game have richly earned him a place in baseball’s shrine.