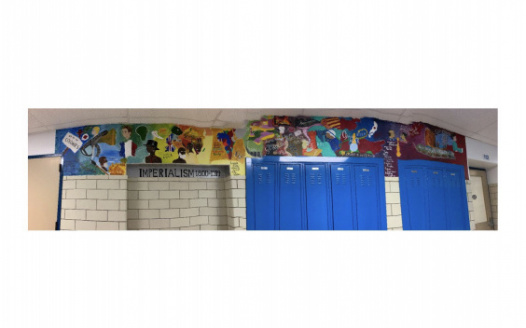 Why the Imperialism Mural at GL Should Be Replaced

Hi guys! We’re sure that most of you are aware of the imperialism mural which is located on the right side wall of the history wing. It was created about 15 years ago by former Governor Livingston students with a former teacher. As founders of the new Student Activism Club at Governor Livingston, we feel it is our duty to make a change by countering the negative stereotypes that this mural portrays.

One of our main goals as a club is to make the school a more open minded and progressive environment where all students and faculty feel welcomed. We believe that this mural fails to welcome different groups of people through its negative portrayal of represented ethnic groups. This mural was created over 15 years ago, and times and perspectives have changed. We now understand that what is depicted on this mural is not respectful, nor is it politically correct.

The depictions of black, Native American, and Asian culture is offensive and the stereotypes are frankly outdated and wrong. We want to ask you, why has this mural been kept up and tolerated for so long? We would like to address the student body to acknowledge that this is not acceptable. Minority communities need to be better appreciated and represented at our school. We believe that repainting this mural would be a step in the right direction.

We know Governor Livingston is capable of making this change and we would like to achieve it as soon as possible. In the future, we plan to partner with the art club to design and repaint the mural in order to more openly and accurately express what occurred globally during imperialism. We want to express the dangers of the racial stereotypes depicted in this imperialism mural. Please know that as students, it starts with you.