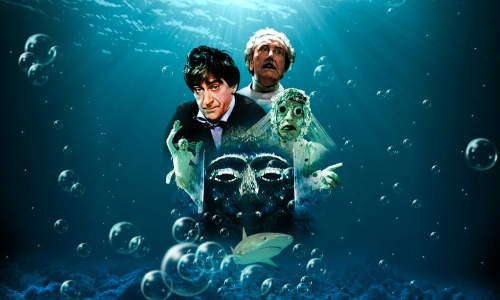 Get Underwater Menace Released On DVD

Reasons being that the BBC have been unable to find a company who find it financially viable to animate the missing episodes, now I have spent over 10 years collecting the all the DVD's and with only 3 left to go I long ago resigned myself to the fact that with so many classic serials missing, presumed lost forever, my collection will never be complete.

However the idea that one of the missing serials exists, has had special features made for it and was ready to be animated for release, will now seemly never be released makes that situation even more upsetting.

I love the animated reconstructions, they are fantastic, however when the BBC released The Web Of Fear, the missing episode three was reconstructed using tele snaps. Now this was by far nowhere near as good as it would have been to see it animated but just to see the episode for the first time was like watching a brand new series episode, that same amazement and excitement!

So here is where this petition comes in, I'm not asking the BBC for an animated release of Underwater Menace as that doesn't seem financially viable, but a tele snap reconstruction, as I'm sure many fans would agree it would be better animated but the opportunity to see any version of the missing episodes for the first and have it on proud display in my collection would be good enough for me!

My aim is for 10,000 signatures to show the BBC that there is still a demand for this DVD and even if it's not an animated release the fans would still love to see it released! But if this petition reaches 10,000 don't stop there! We want as many people as possible to help with this!

- On behalf of all Doctor Who fans!