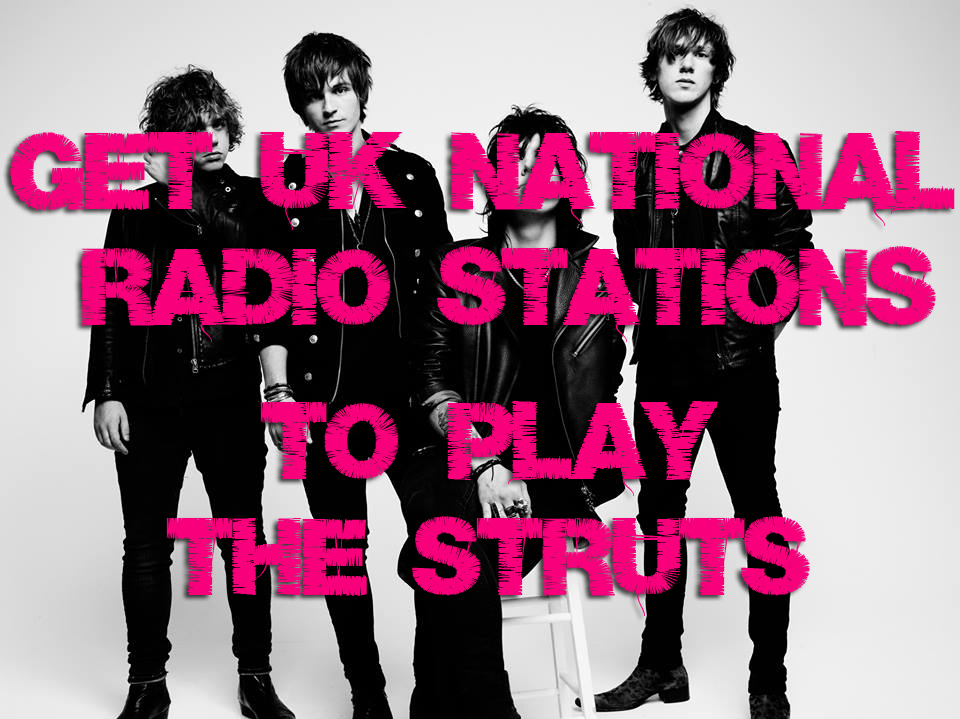 GET UK NATIONAL RADIO STATIONS TO PLAY THE STRUTS

The Strutters Army want UK National Radio's to play The Struts Music and when approached they full on refused even though they are listed with artists on their playlists.

I think it's about time The Struts get some UK Airplay.
This week alone (being 28th July 2014) The Struts released their first album and without any help from the media, TV or Radio they have reached the Midweek Top 40 album chart.
GET THE ALBUM HERE
iTunes: http://tinyurl.com/l7cmb6r
Amazon: http://tinyurl.com/ot3r65c
Put Your Money on Me - The Struts has been approved but then 'refused' because it was 'Too Rocky' yet many people are requesting the song to be played. Why have a system to request songs when you won't listen. I thought that is what a request system is like - if a song is requested so many times you should play it and not ignore it because 'It's too Rocky'
Another thing, PYMOM was requested at 4am and it was played two months ago so doesn't that make the whole system hypocritical?
There is a Facebook created to help take down the Radio Stations if anyone is interested in seeing what we are about and help us take on the Radio's.
https://www.facebook.com/groups/605567326226089/
This band need the attention they deserve and we will win.
I know this is only something so small but we can show it to companies, producers, radio presenters etc. etc. that it is a matter and we won't back down.