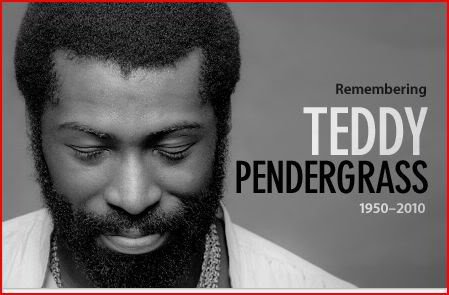 Teddy Pendergrass was the lead singer of Harold Melvin and the Bluenotes. He was the voice behind such classic Philadelphia International hits as "If You Don't Know Me by Now","Wake Up Everybody", "The Love I Lost" and "Don't Leave Me This Way"!

Teddy left the group in 1976 and went on to international super stardom becoming the first male R&B singer to have 5 consecutive platinum albums!

Hits like "Close The Door", "Turn off the Lights" and "Love TKO" are R&B radio staples. Teddy's innovative style and technique is often imitated but Teddy's stage presence and magnetism has never been matched. He was often referred to as "The Black Elvis" because he drove women into a frenzy with his powerful voice and matching good looks. To date, Teddy is the only artist to ever successfully sell out crowds of "For Ladies Only" concerts from coast to coast!

Teddy was left a quadriplegic in 1982 as the result of a car accident. That didn't stop Teddy from fighting back. He returned with the album Love Language in 1984. The album contained the hits "Your My Choice Tonight" and "Hold Me" with a then unknown Whitney Houston. Teddy released the album Workin' it Back in 1985 with the Top 10 hit "Love 4/2".

Teddy defied the odds again in 1988 with the album Joy giving Teddy another number one hit with the album's title track!. The album showed Teddy was still a musical force to be reckoned with. The follow up single "2 AM" was also a Top 10 R&B hit.

Teddy came back again in 1990 with yet another #1 R&B single "It Should Have Been You" from the album Truly Blessed. "Believe in Love" from the album A Little More Magic gave Teddy another hit in 1993! Teddy would record a total of 8 albums after the accident including a live CD and a Christmas album.

Teddy showed unbelievable courage by performing on stage in a wheelchair for the first time at Live Aid in front of 100,000 people at JFK Stadium in Philadelphia. Teddy's performance was viewed by 1.5 billion people across the world. Teddy starred in the Broadway musical "Your Arm's Too Short to Box with God" with Stephanie Mills in 1996. Teddy returned to performing live concert tours in 2002 in front of sold out crowds!

In 2007, Teddy celebrated 25 years of living with spinal cord injury with Teddy 25- A Celebration Of Life, Hope, And Possibilities. The star studded event included performances by many legendary performers including Teddy himself, who performed a song he wrote especially for the celebration- 'I Am Who I Am ".

Teddy passed away in 2010 at the age of 59. During his later years, Teddy continued to be an advocate for people with disabilities. Teddy's influence can still be heard today as his music has been sampled by artists such as Nelly, Kanye West, D'Angelo and Jaheim.

Teddy was a legend, an icon and a hero on so many levels. A talent so rare it could never be duplicated. Truly one of a kind.

Please help encourage the Rock and Roll Hall of Fame to celebrate and recognize the remarkable and unsurpassed talent of one of the greatest singers the world has ever known!