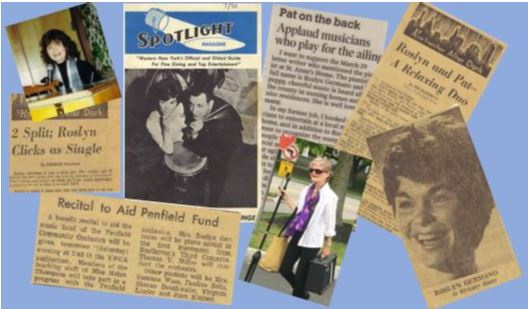 Please join me in support of the nomination of Roslyn "Rockin Roz" Germano for induction into the Rochester Music Hall of Fame. Born in 1931, she was classically trained at the Eastman School of Music. She went on to further her training under the tutelage of Miss Helen Thompson, working as a piano teacher in Miss Thompson's studios. It was then that Roslyn first started giving back to the community through her music, playing the difficult Beethoven’s 3rd Concerto first movement with the Penfield Community Orchestra in a charity event to raise money for the Penfield music fund. She went on to teach for 6 years. In 1963, she was hired at the Maple Leaf Hotel becoming the first female cocktail pianist in Rochester. In 1971 she was noticed by Jim Foley, and hired to play at the Top of the Plaza Restaurant where she played 6 nights a week occasionally opening for world renown acts such as Buddy Rich and Maynard Ferguson. Roslyn went on to play in in just about every restaurant in Rochester that had a piano. She played her last night gig in 2007 where she played at the final night at Bullwinkles lounge. After eye problems made it too difficult to drive at night, she began a new circuit of day jobs playing at nursing homes and memory care facilities. It was there she saw the power of music and the effect it had on Alzheimer patients. Many of these facilities were subjected to budget cuts and as a result, would not have money for entertainment. Roslyn would still show up and play for free because she realized that her playing and singing the old songs were many times, the only bridge back to the real world. Seeing patients start to mouth the words to an old song or start to cry as they relive sweet memories, fills Roslyn with the energy to keep playing. Roslyn is now 87 years old and still driving to the various nursing homes and memory care facilities and playing and singing to the residents. She was recently featured on WROC TV channel 8, Rochester in the Extraordinary People segment. That story can be seen here. In 2018, A film maker from New Orleans came to Rochester to film and interview her. A 5 minute clip can be seen here. Password is: rockin. Occasionally, Roz still will come out and join her son on stage for a few songs. See clip here.

Roslyn Germano has made a definite connection to the Greater Rochester Region and has made a significant contribution toward the creation of musical excellence. We, the undersigned fans of Roslyn "Rockin Roz" Germano support her nomination for induction into the Rochester Music Hall of Fame