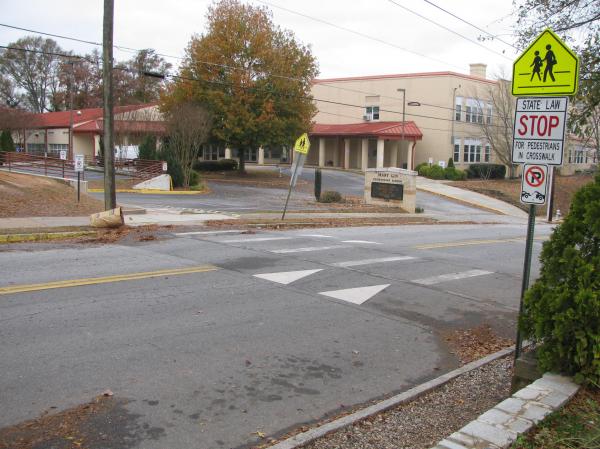 We understand there may be a need to change traffic patterns and routines getting to Mary Lin during, and after, our school's renovation. Until a thoughtful and collaborative long-term traffic plan is developed between APS, City of Atlanta, and Mary Lin community stakeholders,DON'T CHANGE THE CURRENT MORNING DROP-OFF SYSTEM on Monday, Dec. 9, 2013.
The last stated reasons for eliminating the drop-off and redirecting traffic were:
1. SAFETY - now the crosswalk is deemed safe with a crossing guard
2. CONGESTION OF SOUTHBOUND TRAFFIC - there will be little change in the speed of southbound traffic due to the fact that children will continue to utilize the crosswalk and "constantly stop southbound traffic"
3. HAVE ONE SOUTHBOUND CARPOOL LANE - best practice in a perfect world but our community street layout is far from ideal, so maybe this isn't the right scenario for us.
The Oakdale/North route services Mary Lin, Paideia, Dekalb Avenue, and local through traffic. It is a much more narrow street with two 4-way stops (one being impacted by a red light closer to Paideia which backs up traffic). The current fencing at the bottom of CP Drive & North Ave. limits the southbound traffic to a single lane and will prove problematic if we try to add more cars. A second, pressure-relieving northbound drop-off is ideal for helping resolve Oakdale's issues.
Though you feel using Oakdale as the only drop-off route would be in the best interest of Mary Lin Elementary, it has not been determined by study that it is in the best interest of the school and all in the Mary Lin community. Your proposed change has huge negative implications with hard-to-see positive impact.
Let the City, APS, and our Mary Lin community look at the data regarding traffic and determine what change would be the most efficient and effective.