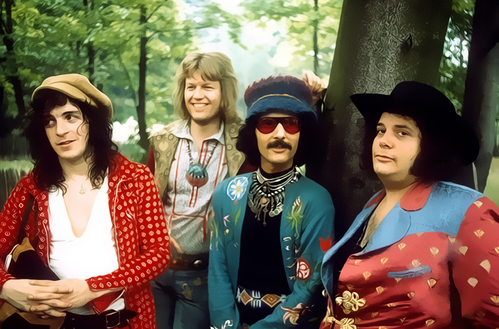 Whoever feels guitarist Leslie West (dubbed by fans "The King of Tone", best known for his axe work on Mississippi Queen, Theme From An Imaginary Western, Nantucket Sleighride, plus 50 years of great Blues and Rock & Roll music, and owner of one of the most influential guitar tones and vibratos in rock history) deserves to be inducted into the Rock and Roll Hall of Fame... and a replica of his trademark Sunburst Les Paul Jr displayed in the guitar yard outside the Hall.......... please sign this petition!

Whoever feels Felix Pappalardi, prolific songwriter, vocalist, bassist and producer (Leslie West, Mountain, Cream, Creation, Kicks and dozens of others!), the man Mic Jagger called the "Smartest Man in Rock and Roll", deserves to be inducted into the Rock and Roll Hall of Fame............. please sign this petition!

Whoever feels Corky Laing, one of the hardest hitting pioneer drummers of the modern day hard rock and heavy metal sound, with precise jazz timing, his trademark cowbell, and the charisma and showmanship that completes the legend of a rock and roll drummer of his era, deserves to be inducted into the Rock and Roll Hall of Fame............. please sign this petition!

Whoever feels Steve Knight, one of the finest rock keyboard organ players who brought the now famous 1960s and 70s New York's Greenich Village and Long Island sound to the international rock and roll stage, deserves to be inducted into the Rock and Roll Hall of Fame............. please sign this petition!

VIDEOS OF THIS GREAT BAND:

Due to the volume of voters in the last 3 days, I'm going to keep this open for the next few days! Cast your Vote and comment!!!

THIS SUNDAY at 11:59PM EDT, I am going to capture ALL of the COMMENTS from our RRHOF Petition into a PDF file to remember for YEARS TO COME.

If you would like to comment, and for it to be ENSHRINED and CHERISHED, and read by remaining members of Mountain, and their family and friends and fans for YEARS TO COME... GET IT DONE BY THIS SUNDAY at 11:59 PM EDT!!! ---> If you haven't already... just sign this petition AND COMMENT!!!

Leslie West, Corky Laing, Felix Pappalardi and Steve Knight, MOUNTAIN will always be remembered as one of the greatest rock and roll bands that ever preformed on a live stage. Some of the greatest tones and the greatest tunes that were ever created .... we never tire of hearing it .

Feel free to sign this petition and leave some loving words. They are read by more people than you would expect, some very close to the families of surviving members of the band.