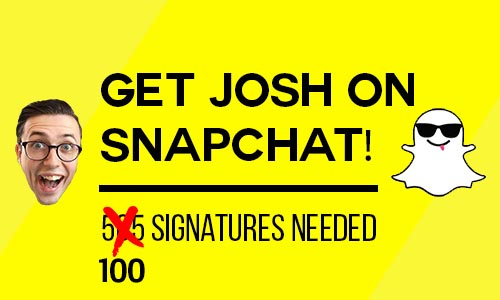 Get Josh On Snapchat!

It was a dark and cold Tuesday on the day that Josh finally decided to take the cold dive into the twitter world. After being deprived of the beauty that is Twitter, Josh finally told a bold jump into this brave new world. Now the only thing that Josh was really missing was Snapchat. The only problem was, Josh always swore that he would never ever ever get a Snapchat. Thanks to the bravery of his extremely handsome (and single) brother, Josh finally agreed to give Snapchat a chance.

But there was one condition, his brother would need 505 signatures to get Josh on Snapchat. His dazzling brother, whose name is unknown, set out on a journey which many said was impossible.

UPDATE: JOSH HAS AGREED THAT HE WILL JOIN SNAPCHAT WITH ONLY 100 SIGNATURES (RATHER THAN 505). THAT MEANS WE ARE ALMOST HALF WAY TO OUR TARGET. AS JOSHUA ZELLO'S HANDSOME (SINGLE) BROTHER ONCE SAID:

"IF YOU CAN BELIVE IT, YOU CAN ACHIEVE IT."