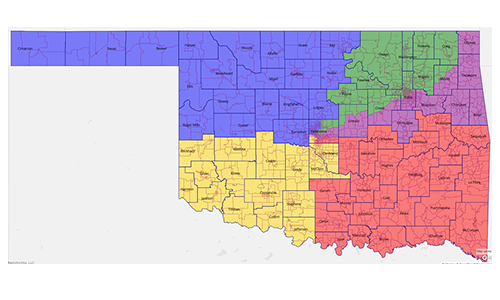 We the undersigned by our signature hereby request that geographic diverse congressional districts be established based on an equitable representation of urban, suburban, rural, industrial, and agricultural regions in every district. It is in the best interest of all Oklahomans to have geographical diversity of representation in the House of Representatives in the United States Congress so that when federal regulations are being considered, all of our representation will have as nearly as possible the same interest for the benefit of the people of Oklahoma. Small geographical districts can become homogenous and very narrow in interest. This is not in the best interest of all of Oklahomans. We request the Oklahoma House of Representatives and the Oklahoma Senate approve the map known as the Congressional Geodiversity Redistricting map for the Congressional Districts in Oklahoma. This petition is for residents of Oklahoma only