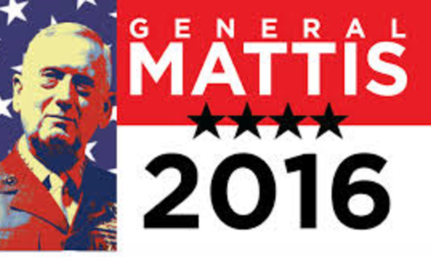 General James Mattis we NEED him as our President

The time has come for the people of this nation to band together and step up to provide the American People with a Presidential candidate that everyone can get behind and support. Over the years we have seen the divide between parties grow further and further apart. Now we have candidates running for president that will continue this divide and continue to tear this country apart to fit their own agendas. We as a country have the power to decide who we want leading our country and our voices need to be heard. General James Mattis is an outstanding leader that we can all get behind. There is no one better suited to run our country then General James Mattis himself. With this petition we have a way of documenting and showing General Mattis that we as a country, once again are calling on General Mattis for his outstanding leadership that goes above and beyond. General Mattis as a leader is the one person who can unite this country and bring it back to the powerhouse successful country we once were. Signing this petition will not only show your support for a true leader but will demonstrate and show General Mattis that this isn’t a social media stunt. This is a true campaign to get our country the leader it deserves. I encourage everyone who signs this petition to send this petition out every single day, to everybody you can and spread the word that there is still hope in the upcoming election that we may elect a true leader. General Mattis eventually will see this petition and know who the American people want to choose to be our next president. With enough support behind General Mattis, being a true American leader, will run for president knowing it is what the American people want. The future of our country is in our hands and we can change everything starting with this petition. GENERAL JAMES MATTIS FOR PRESIDNET spread this out and make this a reality!!!