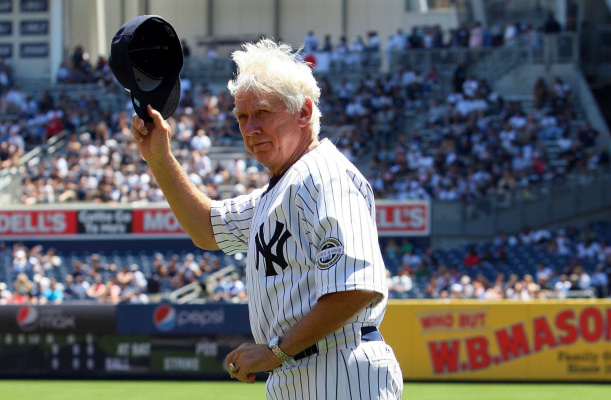 (Note: This petition was started in late August. Tragically, Gene "Stick" Michael passed away on September 7, 2017. This effort will continue).

The next plaque in Yankee Stadium's Monument Park should be to honor Gene "Stick" Michael, a man of many achievements, but most notably as The Architect of the 1996 and forward Yankee Dynasty.

Stick had an MLB career that lasted from 1966 to 1975. His best playing days were as a member of the New York Yankees from 1968 to 1974 during which time he became known as an excellent fielder and master of the hidden ball trick.

Upon retirement he became a Yankee scout and coach. He has been credited by Reggie Jackson for his scouting reports of the 1977 Dodgers that enabled Reggie to hit his three homers in Game 7. In 1978 Stick was a coach on the World Series Championship team.

He was also the manager of the Yankees in 1981 and 1982. In 1990, he was made General Manager and that's when his baseball acumen once again paid major dividends. Prior to then, the Yankees used to build teams by trades and free agent signings. Under Gene's leadership the Yankees began to build teams using organizational youth. Players such as Derek Jeter, Mariano Rivera, Bernie Williams, Jorge Posada, and Andy Pettitte were not only signed or drafted by Stick, but Stick also resisted pressures from ownership to trade away these budding stars for older players. In addition to building from within, he also made some great free agent signings such as pitcher Jimmy Key, and some excellent trades such as the one for Paul O'Neill. Without Gene's leadership there would be no Yankee Dynasty that included 5 world championships from 1996-2009 and there would definitely be no "Core Four".

After his GM career, Gene continued working for the Yankees as VP in charge of Major League Scouting. Since 2003, Gene has been a Vice-President and Senior Adviser. Up until his recent untimely passing, he was still out there evaluating talent and preparing reports. He is widely acclaimed as a baseball genius. He is The Architect and for his accomplishments as a Player, Scout, Coach, Manager and most notably as a Team Executive, the New York Yankees should honor Gene "Stick" Michael with a plaque in Monument Park.