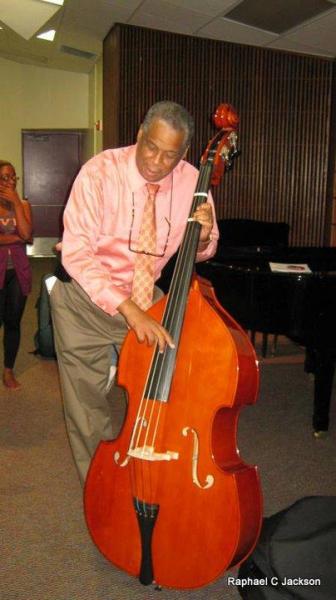 Mr. Raphael Jackson is an African American professor that hailed from the "Big Apple" known as New York City. After teaching for an abundant amount of years in the City, he decided to broaden his horizon and relocate to the South. Mr. Jackson and his family settled in the "Sunshine State" known as Florida and found his niche at the Great Bethune-Cookman University. While being an active professor at such a prestigious institution he impacted the lives of the young wildcats. Mr. Jackson dominated his classrooms while making the discussion topics interesting to ensure participation in the classroom. Not only did Mr. Jackson dominate his classrooms, he upheld a student-professor relationship. While doing so he created bonds and friendships with the students that would last a lifetime. Mr. Raphael Jackson is considered a role model, a mentor, the greatest professor to step foot on Bethune-Cookman University campus, a father figure, and most importantly a friend. From my understanding Mr. Raphael Jackson's services can be discontinued which is displeasing and alarming to the wildcats. This petition is design to help Mr. Jackson remain at Bethune-Cookman University. Mr. Jackson's office is a safe haven to all and without him the sanity of the wildcats is at risk. Let's help keep Mr. Jackson here at Bethune-Cookman University where he belongs! With his wildcats! With the wildcats he created bonds that would last a lifetime! Hail Professor Raphael Jackson! SIGN TO KEEP MR. RAPHAEL JACKSON!