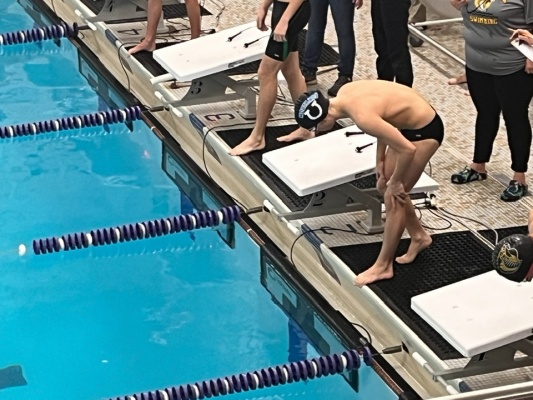 The High School Swim season began competition meets at the beginning of December. Three weeks into the swim season, swimmers have not been able to use the starting blocks at either of the two competition pools, despite having been replaced earlier in the School Year.

The only information parents have been given is that there needs to be a final inspection and clearance from the "Health Department". No other information has been given as to which Health Department and at what level, County or State. This lack of information has been frustrating to parents who want to see their Student athletes have the same competition advantage as other schools in the state and on par with the standards of support for playing fields and venues afforded to other High School sports in Harford County.

The parents and interested parties respectfully request information and action on the final clearance of the starting blocks so that swimmers can compete in regulation swim meets after the winter break.

Background: Harford County High School Swimming currently only has two competition pools that all nine High School teams can use for meets. The starting blocks have been offline since December 2021 after one of the blocks at Edgewood Middle School came loose and injured a swimmer. Swimmers had to use the side of the pool for starts all the way through County Championships (now known as District Champs), with the Regional Finals being moved to the Bel Air Athletic Club so that the pool was within standards for competition. New blocks were installed in the Fall of 2022, however, three weeks into the High School Swim season, swimmers have not been able to use the blocks because they have not been cleared for use.

Impacts: Without the starting blocks, swimmers have to start their races on the side of the pool, often times standing shoulder to shoulder with the swimmer in the next lane. Additionally, the pool deck and gym mats that are used for the side of the pool often get wet and leads to swimmers slipping on their starts, increasing the possibility of injury. These conditions affect fair competition, times and eventually disadvantages our swimmers as they move on to Regional and State Championships.

As per MPSSAA rules, a swimmer will be removed from an event if they have a false start. During last year's Regional championships, some of the swimmers from our High Schools were using the blocks for the first time. Relay teams were also disqualified last year from qualifying for the State Championship from lack of practice in starting from the blocks. Without consistent use of the blocks, under regulation meet standards, the swimmers from Harford County schools are often at a disadvantage when they move on to competition ready pools against teams that have used blocks all season.