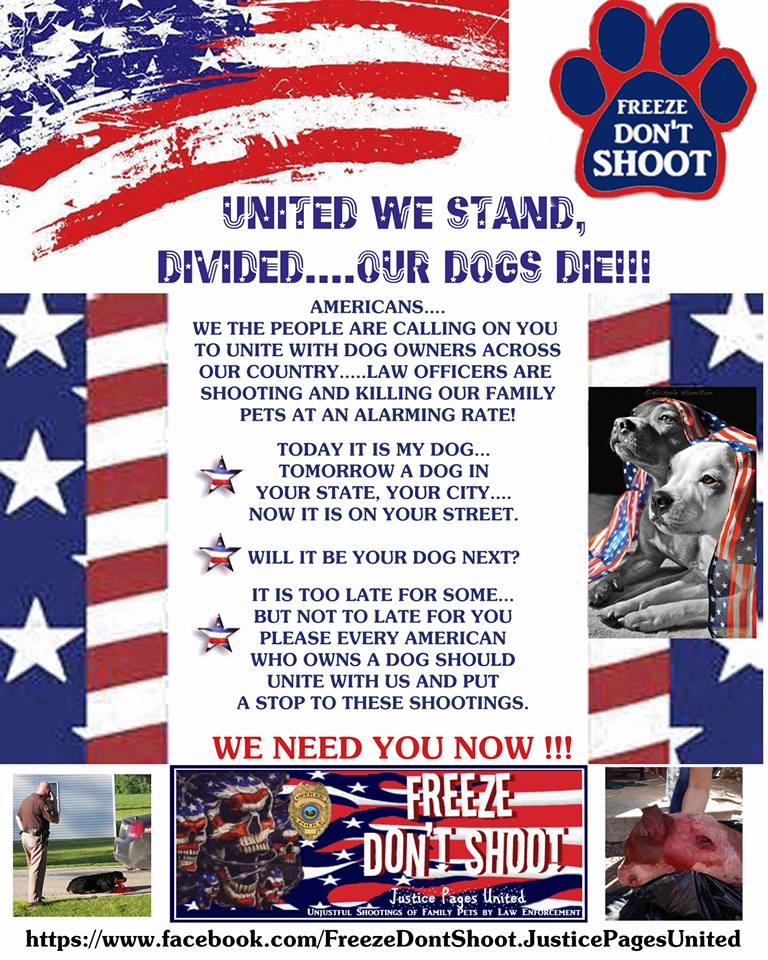 This is a national circulating petition in each state for the purpose of bringing awareness to the public and ask officials to mandate training that would help prevent the use of lethal force against our pets.

Citizens have noticed an increase in media accounts of police officers shooting the family pet with a notable lack of remorse or disciplinary consequences. Police have recently killed pets while merely questioning neighbors about a crime in the area, cutting across private property while in pursuit of a suspect, and serving a warrant at the wrong address. Among hundreds of recent victims: Labradors, Wheaten terriers, and a five-pound Chihuahua. The shooting of dogs by police has become disturbingly common across the country, with police response to be to shoot first & ask questions later. It doesn't matter if your dog is loose or leashed, or if you've posted "Beware of Dog" warnings. If dangerous dogs are so common, one would expect to find frequent reports of vicious attacks on meter readers, postal workers, firemen, and delivery workers. But according to a spokesman from the United States Postal Service, serious dog attacks on mail carriers are vanishingly rare. Bites do happen, but postal workers are given training on how to distract dogs with toys, subdue them with voice commands, or, at worst, incapacitate them with Mace. Mail carriers are shown a two-hour video and given instruction on how to recognize and read a dog's body language, how to differentiate between aggressive charging and playful bounding, and how to tell a truly dangerous dog from a merely territorial one. Few police departments offer this kind of training, though groups like the ASPCA and the Humane Society are willing to provide it. There are also now online training portals offered free of charge.
In closing we the people of Minnesota would like to ask officials to mandate training that would help prevent the use of lethal gun force against our pets.
FREEZE DON'T SHOOT is a nationwide campaign established to stop the killing of pets and strays by law enforcement and mandate training on animal behavior and non lethal methods. FDS is NOT anti-police. FDS is anti-KILLING. The KILLING must STOP.
https://www.facebook.com/FreezeDontShoot.JusticePagesUnited
https://www.facebook.com/groups/FreezeDontShoot.MN/
http://freezedontshootmn.wordpress.com/about/