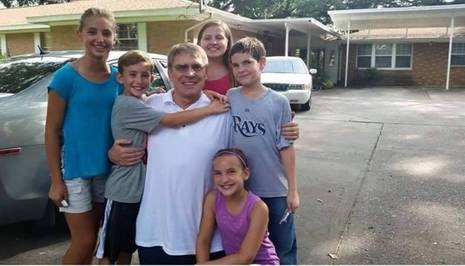 5735 people have signed this petition. Add your name now!

WE THE PEOPLE OF THE WORLD
DECLARE THAT KENT HOVIND AND PAUL HANSEN ARE NOT GUILTY OF ANY CRIME!

Kent Hovind is finally free after 9 years behind bars.

PLEASE TAKE A FEW MOMENTS TO GET CAUGHT UP ON THIS BIZARRE CASE!

In a pair of court orders issued Monday night, Pensacola evangelist Kent Hovind was granted a motion for judgment of acquittal in connection with a March contempt conviction, as well as had three counts of mail fraud and associated conspiracy charges dismissed.

RE: CASE HISTORY
American Government has circumvented the U.S. Constitution at it’s very core. We have an Imperil President that creates unconstitutional law by executive order. A legislature that refuses to do its job by exerting their powers to rightfully impeach him for his unconstitutional orders. And finally a Judicial system that has learned from his unlawfulness by calling a common mans attempt to file lawful claims frivolous. Kent Hovind filed lawful Lis Pendens on the properties the Government ceased. The Court realizes they are lawful, but claim they are frivolous in order to impose criminal contempt charges on Kent. Kent was sentenced more than triple what his charge was allowed by the sentencing guidelines, and that triple sentence is not enough. Because he still stands as a common man and fights all their unlawful, unconstitutional statues, codes and regulations, they continue to act as a third world Country under a Dictatorship to bring him into submission. Kent may lose on this earth, but in the life to come all these Judicial fools and Regulators will be tried and convicted of putting their hands on one of God’s elite. All True believers need to hold this man up in prayer.
Ernest Land
__________________________________________________________________________

The female judge who is assigned to get Dr. Hovind and Paul Hansen has some alarming skeletons in her closet (below)

U. S. DEPARTMENT OF LABOR

In the Matter of MICHELLE M. HELDMYER and DEPARTMENT OF JUSTICE,

The issue is whether appellant sustained an emotional condition in the performance of duty.

On April10, 1996 appellant, a 34-year-old assistant United States Attorney, filed an occupational disease claim for employment-related emotional stress and depression, which she stated she first became aware of on May17, 1996.

Appellant also submitted to the Office of Workers’ Compensation Programs an undated, two page statement, in which she related that a March17, 1994 article from a local newspaper had identified her as the wife of a man who had purchased, through the mail, a shipment of pornographic videotapes from a pornography distributor, which had recently been investigated and indicted by her office. Appellant alleged that she had sustained an emotional condition as a result of being publicly humiliated and vilified following the publication of this article. Appellant noted that she had been promoted by the managing United States Attorney at her office to supervisory assistant on March1, 1994 and alleged that Curtis Fallgatter, the former managing United States Attorney at her office who had been demoted to assistant United States Attorney in 1993 and had conducted the investigation of the pornography distributor, had provided the press with false and derogatory information pertaining to her and her husband in order to exact revenge against her and to discredit the Jacksonville office. Appellant also alleged that Mr. Fallgatter had filed several complaints and grievances until he finally resigned.

Appellant further alleged in her statement that beginning on March17, 1994, the date the story about her husband was printed in the local newspaper and continuing on a daily basis for more than a year, she was vilified both personally and professionally by every local news station and newspaper, which publicly transmitted the false and derogatory accusations given to them by Mr. Fallgatter. Appellant stated that these accusations were also broadcast on national tabloid television shows. Appellant complained that she had “little support” throughout this ordeal and noted that the employing establishment issued no public statements on her behalf, so that, therefore, “the public never heard the truth.”

Appellant stated that she was eventually cleared of all the charges by the Office of Professional Responsibility and a grievance committee composed of local defense attorneys and she subsequently transferred to the Pensacola United States attorney’s office in November 1994. She noted, however, there were more stories written when the pornography distributor was indicted again in early 1996. Appellant alleged that on March17, 1996, she was suddenly overwhelmed by the stress of the past two years, plus the fear that she would once again face public vilification because of the renewed prosecution of the pornography distributor. It was at this point, appellant alleged, that she realized she required counseling to help deal with the stress created by the situation.

Appellant consulted Dr.WendyE. McKee, a psychologist, who submitted an April11, 1996 medical report. Dr.McKee stated that she began treating appellant on March20, 1996, when appellant advised her that she was experiencing continuing mood swings, feelings of anxiety and depression, and sleep and appetite disturbance. Appellant also related to Dr.McKee that she had been preoccupied with thoughts about an alleged attack on her reputation and had experienced feelings of helplessness, irritability and spontaneous crying. Dr.McKee commented that these symptoms were a direct result of the alleged attack on appellant’s professional reputation. Dr.McKee diagnosed major depressive disorder, single episode, moderate and recommended six to nine months of treatment.

By decision dated June28, 1996, the Office found that fact of injury was not established, as the evidence of record did not establish that an injury was sustained in the performance of duty. In an accompanying memorandum to the Director, the claims examiner found that the employment factors appellant cited as the cause of her emotional condition were not competent to establish that the condition was sustained in the performance of duty. The Office, therefore, denied appellant compensation for her alleged emotional condition.

The Board finds that appellant has not established that she sustained an emotional condition in the performance of duty.

Where the disability results from an employee’s emotional reaction to her regular or specially assigned work duties or to a requirement imposed by the employment, the disability comes within the coverage of the Federal Employees’ Compensation Act.[1] On the other hand, disability is not covered where it results from an employee’s fear of a reduction-in-force, frustration from not being permitted to work in a particular environment or to hold a particular position, or to secure a promotion. Disabling conditions resulting from an employee’s feeling of job insecurity or the desire for a different job do not constitute a personal injury sustained while in the performance of duty within the meaning of the Act.[2]

Workers’ compensation law does not apply to each and every injury or illness that is somehow related to an employee’s employment. There are situations where an injury or illness has some connection with the employment but nevertheless does not come within the coverage of workers’ compensation. These injuries occur in the course of employment and have some kind of causal connection with it, but nevertheless are not covered because they are found not to have arisen out of the employment.[3]

In the present case, appellant stated that as a result of the accusations made against her in a March17, 1994 newspaper article, which stemmed from the fact that her husband was identified as a purchaser of pornographic videotapes mailed by a distributor investigated and indicted by her office, she was investigated by the Office of Professional Responsibility and a grievance committee composed of local defense attorneys. Appellant did not indicate whether this investigation was authorized by the employing establishment. Nevertheless, the Board has held that, generally, injuries sustained during investigations into alleged illegal or improper acts are not within the performance of duty.[4] Where the evidence demonstrates that the employing establishment has neither erred nor acted abusively in administration of personnel matters coverage will not be afforded.[5] In the instant case, an investigation into allegations of improper behavior was undertaken by a professional licensing board and an oversight committee comprised of members of appellant’s profession with the knowledge and approval, if not the imprimatur, of the employing establishment. Where the evidence demonstrates that the employing establishment neither erred nor acted abusively in the administration of such matters, coverage will not be afforded.[6] In the present case, appellant’s allegation that the employing establishment did not openly support her during an appropriate investigation of her conduct by the committee, thus resulting in adverse publicity against her, does not constitute a compensable factor of employment.

With regard to appellant’s general allegations of harassment on the part of Mr. Fallgatter, the Board has held that perceptions of harassment are not compensable under the Act.[7] For such allegations to give rise to a compensable disability under the Act, there must be evidence that the harassment did in fact occur.[8] In the instant case, appellant claimed that she was harassed by the false and derogatory accusations made by Mr. Fallgatter, a former co-worker/supervisor acting in his own capacity. Appellant, however, never alleged that he was acting on behalf of the employing establishment. In fact, appellant indicated that he was no longer employed by the employing establishment at the time he allegedly harassed her. Appellant has, therefore, failed to establish that her former supervisor’s alleged harassment constituted a compensable factor of her employment.

Regarding appellant’s allegation concerning her fears and stress caused by gossip, disability resulting from an emotional reaction will come within the coverage of the Act only if the disability results from an emotional reaction to regular or specially assigned work duties or a requirement imposed by the employment. Appellant’s fear of gossip is a personal frustration, which is clearly not related to her job duties or requirements and is thus not compensable as a specific factor of employment.[9]

Accordingly, appellant has failed to establish a factual basis for her allegations that her claimed emotional condition was caused by factors of her employment.

The decision of the Office of Workers’ Compensation Programs dated June28, 1996 is affirmed.