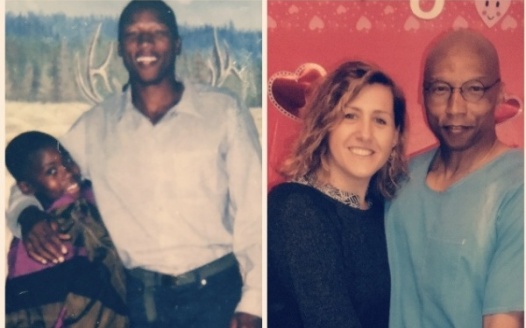 Sentenced to LWOP at age 19 - Freedom for Johnny!

It's been almost 35 years since Johnny R. Taylor #C83109 was sentenced to LIFE in prison without the possibility of parole. A 54 years of age model prisoner and his friends are advocating for his FREEDOM.

Johnny R. Taylor is born in 1966 in East Palo Alto in a gang and drug infested community. From the age of 9, Johnny experienced the life of being incarcerated in one form or another. Raised by an heroin addicted mother, who had 4 children by the age of 19, there was very little supervision or support in the home, where Johnny and his siblings were often left on their own. Johnny's father was absent in his life, thus leaving him without a male role model or any financial support. This contributed to inadequate care in the home, lack of resources for the children, including living with an explosive and physically abusive mother and often gone for lengths of time.

Johnny has never blamed his mother or the living conditions of poverty and abuse for his behavior, but it is clear that the foundation he started with did not lend itself to a healthy and thriving environment.

Early on, Johnny started to steal things such as food and money in order to have the basic necessities as his mother was unable to provide these for him. When he was caught, he was placed in Juvenile detention where he was further abused by the system of care. There were restorative justice programs, nor therapy provided while incarcerated as a youth. When he was first incarcerated at 9, the juvenile justice system did not investigate his home environment, and as a result, no one ever intervened and sought help for Johnny and his family.

When released from Juvenile Hall or County Youth Authority, Johnny would return to the same unhealthy, chaotic and abusive environment with no support, no social service interventions and no treatment for the family system. This back and forth from Juvenile detention over the years continued, and the cycle of repeated incarceration continued until the age of 18.

When Johnny was 19, he shot and killed a gang member who firebombed his friend's car parked next to the house during the night. He was sentenced to Life without the possibility of parole; he recounts this event with great remorse and takes full responsibility for the crime he committed.

Today, the laws that were against him have all been overturned but, unfortunately, because the laws have not been made retroactive, he remains trapped behind prison walls. A life without parole sentence, devoid of hope and compassion, is inhumane and akin to a living death. 34 years away from his family and friends has been punishment enough.

HIS LIFE IN PRISON :

Johnny has spent those last 34 years educating himself, utilizing the mental health system in prison to have a better understanding of how and what led to his taking the life of another. He has spent years developing a life practice of nonviolence, and sharing this practice with other inmates and prison staff. He has never committed any acts of violence, nor has he participated in racial or group riots and upheaval in the prison system. As a result of this, Johnny himself has been the victim of assault and violence.

He now spends most of his days alone, writing, meditating, reading and continuing to develop himself into a productive and integrated person and he offers his insight and support to others who also want to change their lives and be a positive source for others.

There is nothing left to be gained by Johnny spending the rest of his life in prison. At 54 years of age, he poses no meaningful risk to public safety. Instead, he now has an immense desire to give back to others and guide them so that they don't head down the path he has been.

Johnny is a different man who has taken full responsibility for the crime that led to his incarceration. He deeply regrets his action and expresses remorse about it. He has a full understanding of who he was when he was first incarcerated, and how he has changed and grown to become the productive and contributory person he is today.

Johnny is a proper candidate for clemency or commutation based on his record over these decades in prison, and based as well on the stated policy goals of Governor Newsom.

We hope that Governor Newsom will give him a second chance.

For more info, go to : http://freedomforjohnny.life