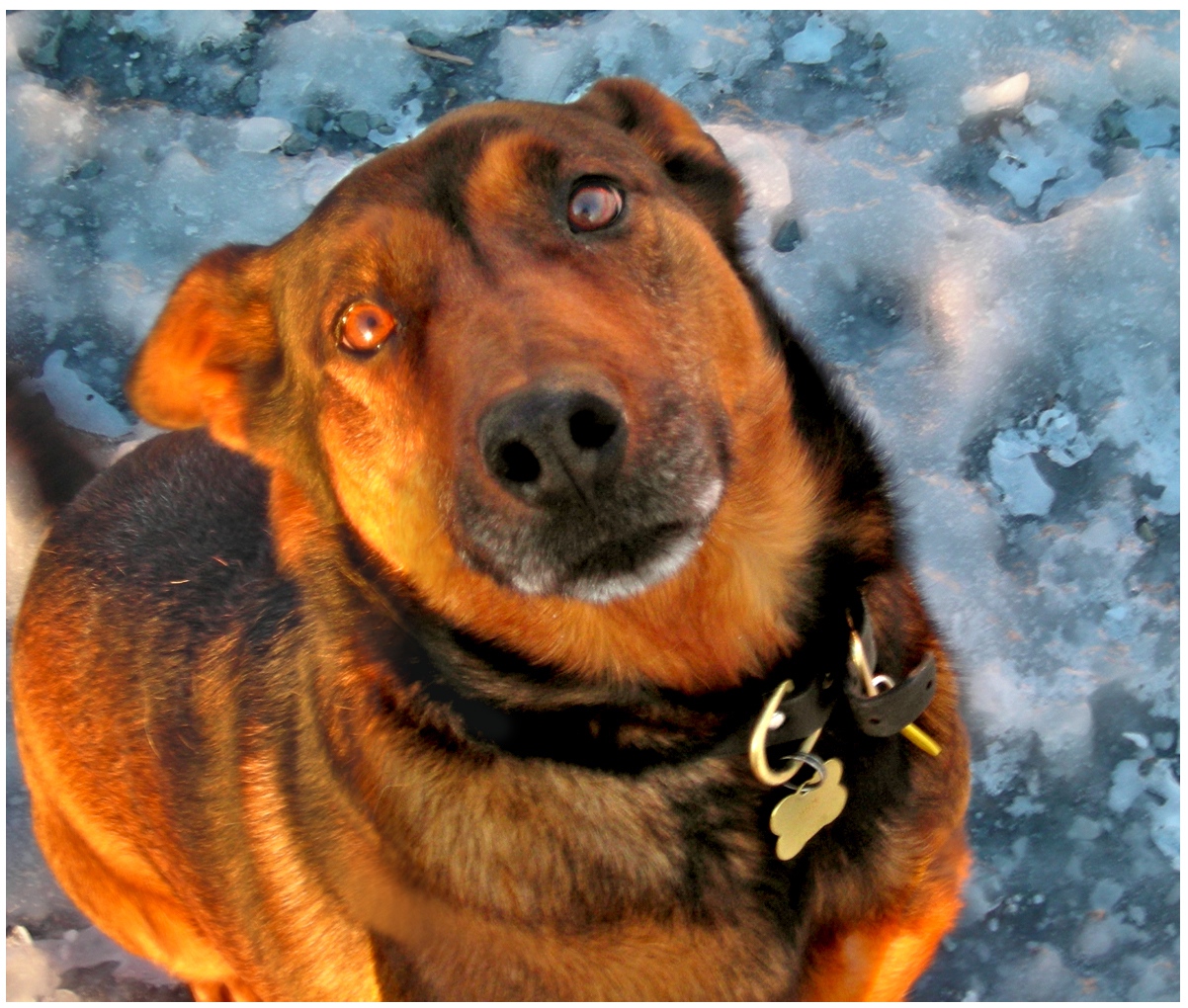 TO THE CITY OF HALIFAX, NOVA SCOTIA:

TIME FOR A CHRISTMAS MIRACLE!

WE THE UNDERSIGNED DEPLORE THE MISTREATMENT OF THIS WOMAN AND HER DOG.

Seven years of hardship, loss, and separation they've endured at the hands of a predatory municipality for a dog and owner who did nothing to deserve the harshest penalty under the law must stop NOW.

THIS IS BRINDI'S LAST CHANCE!*

We join the thousands who strongly oppose Animal Services Supervisor Lori Scolaro and former Animal Control officer Tim Hamm's decision to euthanize Brindi. They seized this mixed-breed neutered female on July 24, 2008 from the home of her owner, Francesca Rogier, with the aim of killing her without any hearing or appeal.

Ms. Scolaro seized Brindi again on September 24, 2010, only ten weeks after her release. The reason? A ten-second scuffle with a dog on September 14, on or near her property. Once again there was little or no harm done and she had not tried to retaliate against two humans who kicked her. Scolaro and the prosecutor Katherine Salsman continued to press for an order to destroy even though they knew they had little chance of convincing a judge to order Brindi put down. The incident was no worse than previous scuffles and there were several professional assessments on hand showing her to be very trainable and sweet. No AC officer ever witnessed her being aggressive. The law calls for fines for the offences involved - running at large, muzzle violation, attacking - but Scolaro and Salsman went above and beyond the law in search of revenge.

There was also evidence of provocation but the judge in the second trial gave it no weight. Lengthy statements by the couple with the dog - the wife related to those who first reported Brindi and testified against her in 2010; the husband a city employee - reveal they'd been stalking her all summer long, in what sounds like a misguided search for revenge. They said they'd often walked past her dog run, and she was provoked to bark at them. Small wonder Brindi reacted the night Francesca drove home in a new (used) car, unaware she'd mistakenly lowered instead of raised Brindi's backseat window. Brindi saw them and their dog as intruders, so she squeezed through the partly closed window to guard her territory. She chased the dog in circles while the people kicked at her - until Francesca quickly regained control of Brindi, politely apologized, and asked if their dog was okay. They said yes, but still rushed off to call animal control, shouting back in response to Francesca's pleas that they didn't care if Brindi was killed.

*THE CURRENT SITUATION: As she cannot afford legal counsel and Halifax would not agree to court-sponsored mediation, Francesca's chances at the NS Court of Appeal are not good. She was diagnosed with ovarian cancer in April. She is still recovering from an operation to remove a large tumour led to a full hysterectomy. The hearing is now set for February, provided she can complete the necessary paperwork.

Brindi is now twelve years old. She has been locked up for over seven years. She is friendly and gentle, has never bitten a human being or seriously injured another dog - and is in no way categorically "dog aggressive". A rescue, she passed obedience with flying colours and was never given a chance to perfect her occasional lapses of behaviour - most of them triggered by other less well-behaved dogs.

WE DEMAND that Halifax immediately release Brindi to Francesca, so the two can live out their days together. The only acceptable alternative is to foster her safely outside of Halifax pending the outcome of a court appeal.

The city has not released any health updates since 2012, nor provided any independent confirmation that she is alive. After the first several months of confinement in 2009, Brindi contracted chronic pancreatitis and dental/gum disease, both of which threaten to shorten a dog's life. The majority of her confinement has been extra-judicial and contrary to the limits on seized property in the Canada Criminal Code - i.e., unlawful.

This petition originated in 2008. It has been updated to reflect some of what has transpired. Though the story has many twists and turns, it all goes back to a few city officials with no specialized training refusing to reverse their clearly arbitrary and unjustified decision to kill a good dog.

Brindi has never bitten a human being, nor has she seriously injured another dog. She is calm and affectionate to people and other dogs. She is not categorically "dog aggressive" but gets on well with the vast majority of dogs - and cats! She has exhibited a streak of territorial aggression on a few occasions, but these were extremely minor. No animal control officer or trainer has ever observed her behaving aggressively and she did not attack people even when they provoke her by kicking her!

In order to paint a false picture of Brindi, Halifax's officials have relied on blanket statements, gross exaggerations, and half-truths, exploited excessive powers granted by poorly written laws, and encouraged public misconceptions of the case. In the few random instances where she lost control and chased a dog approaching her property to destroy Brindi, there were never any grounds to kill her. Francesca was always quick to respond and little or no harm was done. Over the years she has hired experts to evaluate Brindi five times, the last in 2012: in all cases the results were very positive.

There are many well-known cases of severe injury and fatality resulting from dog attacks in Halifax that did not prompt it to seize or euthanize a dog. Yet the city has put this pair through hell and refused all reasonable alternatives to death at every turn in an unconscionable breach of the public trust.

THE SITUATION NOW: Brindi has been in the city's custody for over six years. No one other than city employees and contractors have seen her since 2012. Francesca, who has done everything possible to save her life, has not seen her dog in four years. By now the single, childless woman has sacrificed her successful career as an architect, compromised her health, and exhausted all her savings – much of them going to incompetent and dishonest lawyers. The story of the city evicting her from her own home and attempting to demolish it in order to keep her from getting her dog released from unlawful custody is one of the many ugly episodes in this case.

THE CHALLENGE: Getting Brindi to safety.

The latest court decision (June 2012) deemed Brindi "not beyond redemption" and did not order her to be put down. But, relying on factual errors and exaggerations, it portrayed Francesca as an irresponsible owner, totally ignoring glowing endorsements from the trainer and vet.

AS A RESULT, instead of letting Brindi rejoin Francesca, the only family she ever knew, the judge turned over the decision about her fate to the city. This is terribly wrong, because the city has never been willing to consider any alternative but death. And the judge did not even require the city to make known the results of its own assessment, or what it decides to do with Brindi.

Francesca appealed the decision, but her appeal was denied in July of this year. She filed for a second appeal on August 18, 2014 - despite fears that city will retaliate against her and take her home - but this new process can easily drag out so long that Brindi will in custody.

THE URGENCY: The threat of death by “euthanization” is real, because Halifax – which has never hid its determination to kill Brindi – will not confirm what it will do, and plans to withhold this information from the public.

The undersigned are among thousands who have followed this case for years and have fallen in love with Brindi, and object to the coldhearted and senseless way this case has been handled all along.

We declare that any outcome other than the return of Brindi to Francesca, or her adoption to a person as committed to her as she is, is unacceptable and would be intolerably cruel.
We call on Halifax to answer to the public outrage its unfair and harmful treatment of Brindi and Francesca has caused. If it will not return Brindi to Francesca, it must allow the dog to be adopted by a good home – preferably outside of Halifax, where there is no threat of death or removal as a punishment for harmless scuffles!!!

SEE NOTE BELOW! Brindi is a five-year old spayed female mixed-breed dog impounded on July 24, 2008 by Halifax Nova Scotia animal control officers. On August 7, the day slated for euthanization, the city confirmed it will suspend the order for the duration of court proceedings, as dictated by law. However, Francesca is not allowed to visit Brindi. Brindi has never caused serious injury or harm to anyone. In order to avoid a long legal battle, this petition for her return is sponsored by Brindi's devastated, loving owner, Francesca Rogier, who is ready to take full responsibility for Brindi getting loose. She has already fenced in a 65 feet long run right up to her back door and a second enclosing her front entry ramp. THANK YOU!! Your help in saving Brindi's life is greatly appreciated! !!!!!!UPDATE: A court hearing is not likely to take place until Christmas. If at any time before then, the city decided on its own to review the case, Brindi would be out much sooner! PLEASE contact local officials, including the mayor, to ask that they request Animal Services to review the case. TO OUR FRIENDS OUTSIDE OF HALIFAX: It would be very helpful to this cause if Brindi's story goes national, perhaps even international. See freebrindi.blogspot.com and the Facebook Group "Save Brindi" for media contacts. Canadian consulates and embassies may even be contacted by those living outside of the country: ask them to Free Brindi Now!!