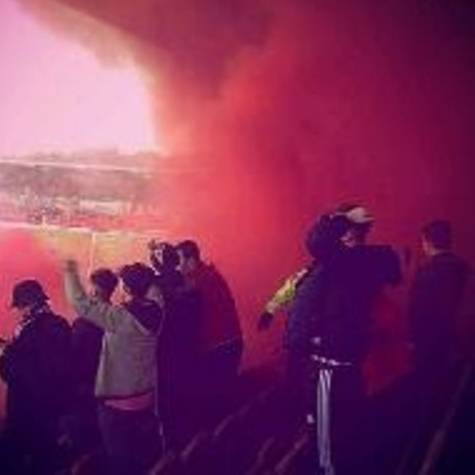 It is official. Three young fans from Row H have been banned for the rest of the season. Fans that love their team and club, and have given so much to Wexford Youths. I have so many things to say, but what's the point. Nobody will listen. We sometimes fall into the trap of thinking that corruption only exists in far away places. How wrong we are. Corruption lives on our doorstep. It can be as small as not letting someone argue their point.

Three die hard fans released pink smoke into the air last Friday, as we scored to lead against the second best team in the country, a proud moment for the club. In our first season in the Premier. Two of them are season-ticket holders. You could say it was a passionate act of supporting the team, not necessarily the club. Nobody was hurt in the incident.

Does this warrant a season-long ban?

There was no video or photographic evidence of the incident. Just one or two supposed eyewitness accounts. They didn't even guess the right people.

It was a decision made by the board. We have been told that if we appeal "they won't listen".

We are not the trouble-makers we have been unfairly branded as. The club have contacted other clubs to warn them about us being trouble-makers. We are genuine football fans, who love their team and club. We just wanted to create a good atmosphere at Turners Cross last Friday. We didn't mean to cause any fuss. We wanted to do it for the team, so they could look up into the stand, and see that there are fans that care about them. Fans that are willing to make a 6-hour round trip just to support them.

I recall a BodiBro interview of Danny Furlong who said "hearing the fans singing in the crowd gives us a real boost". We are young. We are the future of the club. But they will never understand.

This is the club that we have fundraised for, helped raise attendances. I have even stood on Main Street for 3 hours in the freezing cold on a winter morning just to raise what I could for the club. Why did I bother.

The club are making a big mistake. The pyro was a one-off that was meant for Ballybofey last year when we won the league, but it arrived too late. It was a one-off and was never going to happen again. We were going to pay the fine.

I plead with them to reverse their decision. It's not too late even though you say it is. It kills us to not watch our beloved team play. We have apologised and still do.

You won't hear us from Row H anymore for the season. If you ban 3 of us you ban all of us.

For now, we wish the Youths all the best for the rest of the season. We will travel to away games when we can to cheer on the boys in pink...