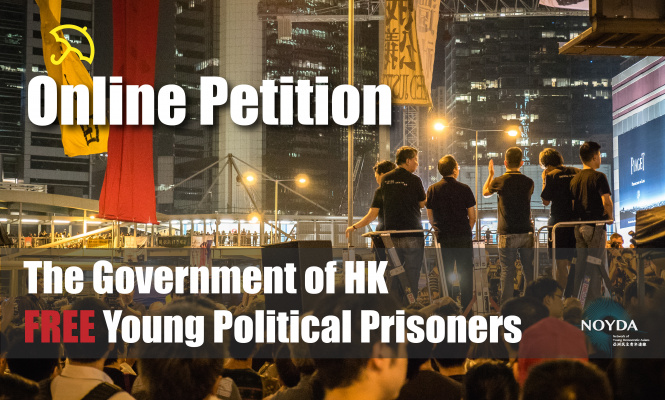 526 people have signed this petition. Add your name now!

On 15 August 2017, sixteen activists were sentenced to 8-13 months in prison by the Hong Kong government for protesting in 2014 against the controversial HK$340 million northeast New Territories development plan. Moreover, young activists from Umbrella Movement and other movements are also facing high risk of disproportionately harsh sentencing at the upcoming trial.

Network of Young Democratic Asians (NOYDA) strongly condemns that Hong Kong Department of Justice using unjust trial as political prosecution to repress activists. Hong Kong has always celebrated its rule of law traditions. However in recent years Hong Kong has been shadowed by authoritarian rule which merely claim rule by law. We believe that citizen's right to political participation, as one of the fundamental human right, should not be suppressed by Beijing and Hong Kong government under any circumstances. NOYDA calls on the international community not to condone the situation of the Hong Kong Government's violation of human rights.

Recession of democracy and civil liberties unfortunately have been a trend in Asia in recent decade. This sends a loud message to all those who passionately pursue genuine democracy. Members of NOYDA will stand in solidarity with Hong Kong against any sorts of repression.

Join us by signing this petitions and show support to Hong Kong activists !