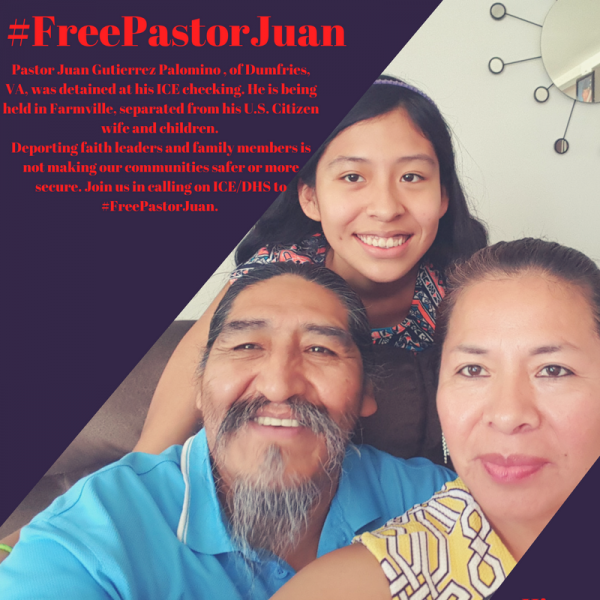 247 people have signed this petition. Add your name now!

Americans believe in the power of thriving families. We believe in caring for our children. We believe in opportunity. So when someone like Pastor Juan Gutierrez Palomino faces deportation, separated from his children and wife, it goes against all of the things we hold dear. For the past 5 years Pastor Juan has been attending regular ICE check-ins. In June, without warning or provocation, he was detained and transported to Farmville to await deportation.

Now Pastor Juan is being held captive while his wife and children - one in middle school, the other in the military - try to piece life together without their primary breadwinner and cornerstone of their family. Pastor Juan’s whole community is suffering. As a pastor he has provided support to friends and neighbors and members of their church.

We are calling on ICE/DHS to live into our shared American values and release Pastor Juan. There is no reason to detain a man who has checked in every time he was asked. Pastor Juan should have his day in court - and he shouldn’t be locked up while he’s waiting.

Deporting pastors, fathers, husbands, community members serves no purpose other than amplifying fear and distrust in the community. This is a terror campaign to isolate our new American neighbors.