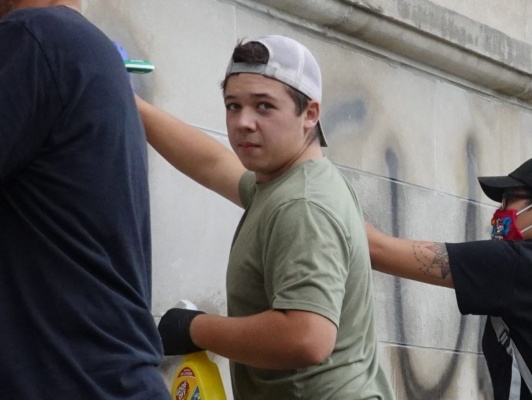 4609 people have signed this petition. Add your name now!

Update 2/15/2021 - Robert Barnes, one of the finest civil rights attorneys practicing today, just became part of the Rittenhouse legal team. Robert has put out a notice for the official fund raising site on his Local's account. You can donate to the official fund here.

Update 9/28/2020 - Rittenhouse's legal team released a video detailing the events described below. I HIGHLY recommend you take the time to watch it. It is one of those rare "must watch" videos.

The evening of August 25th, a young man named Kyle Rittenhouse left work as a lifeguard in Kenosha to help a local high school clean graffiti that had been plastered across it by rioters.

After helping clean the graffiti, he and a friend learned that a local auto dealership, along with two near by mechanic’s shops, needed help protecting what little remained of their businesses from the previous nights riots. In true selfless fashion, Kyle answered that call for help.

According to Kyle’s attorney, “Kyle and a friend armed themselves with rifles due to the deadly violence gripping Kenosha and many other American cities, and headed to the business premises. The weapons were in Wisconsin and never crossed state lines.”

Later that night, Kyle was interviewed by an independent reporter, where he explained his motivations for being there. Kyle, who had EMT training from being a lifeguard said, “People are getting injured. Our job is to protect this building. And part of my job is to also help people. If there is somebody hurt, I’m running into harms way, that’s why I have my rifle with me, so I can protect myself, obviously. I also have my med kit. ” There are several videos of Kyle offering EMT services and water to protesters that evening.

Unfortunately, Kyle would not make it through the night unscathed.

During the riots, Kyle was attacked by a violent felon and registered child sex offender named Joseph Don Rosenbaum. Rosenbaum was angry that Kyle was armed and defending property that Rosenbaum wanted to destroy, which ultimately lead to Rosenbaum attacking Kyle. Rosenbaum was recorded taunting other armed citizens earlier in the evening, calling them the n-word and daring them to shoot him, while trying to instigate fights with them.

At some point during the evening, Rosenbaum, along with a group of other instigators, chased Kyle through a parking lot. The chase was caught on video and directly witnessed by Daily Caller reporter Richie McGinniss, who was mere feet away as the incident unfolded.

It is currently believed the provocation for the mob's anger against Kyle arose after Kyle used a fire extinguisher to put out a flaming dumpster that the rioters were pushing down the road toward police squad cars. Reporter Drew Hernandez, who was following the crowd and witnessed the shootings first hand, said the crowd was trying to kill Kyle for defending property and putting out fires.

The video shows Rosenbaum chasing Kyle, and throwing what appears to be a bag containing a heavy object at Kyle in an attempt to injure him. Immediately following Rosenbaum’s throw, an unknown instigator can be seen raising a pistol and firing it in Kyle’s direction.

The gun shot caused Kyle to stop, turn around and raise his rifle at his attackers. As Kyle did so, Rosenbaum was close enough to lunge for Kyle’s weapon. Rosenbaum’s assault, along with the shot that had just been fired from the other instigator, caused Kyle to fear for his life. As Rosenbaum lunged for Kyle’s gun, Kyle defended himself by shooting Rosenbaum several times, killing him.

Kyle tried to run from them toward the police, but he tripped and fell, allowing the mob to descend upon him. One of the violent rioters jump kicked him, another swung a skateboard at Kyle and tried to grab his gun as he lay on the ground, while yet another pulled a pistol and aimed it at Kyle. The entire event was captured on video from several angles.

The rioter who attacked Kyle with a skateboard was Anthony M. Huber. Kyle defended himself from the attack by shooting and killing Huber. In 2012, Huber pled guilty to false imprisonment with a dangerous weapon and strangulation as domestic abuse. In 2016 he was sentenced to two years in state prison. Huber was arrested again in 2018 for battery.

The rioter who drew a pistol and pointed it at Kyle as he was being beaten and kicked by others is Gaige P. Grosskreutz. Grosskreutz was charged with felony burglary and theft in 2013, and also has gun related charges on his criminal record. Kyle defended himself from Grosskreutz by shooting Grosskreutz in the arm.

A friend of Grosskreutz later commented on social media saying, “…So the kid shot gaige as he drew his weapon and gaige retreated with his gun in hand. I just talked to Gaige Grosskreutz too his only regret was not killing the kid and hesitating to pull the gun before emptying the entire mag into him. Coward” – keep in mind this is a criminal, engaged in rioting, with a concealed handgun, talking about killing a minor who was trying to run away from him. He faces no charges.

After Kyle successfully defended himself from the mob of violent rioters, he got up and resumed walking with his hands raised toward the police line to turn himself in. However, the police were too preoccupied to deal with him at the time, so Kyle left the scene and returned home, where he was later arrested by his local PD.

Kyle is being charged with First Degree Intentional Homicide by Democrat Kenosha DA Michael Graveley. Wisconsin Governor Tony Evers and Wisconsin Attorney General Josh Kaul are also Democrats. No rioters were charged in relation to the property damage, shooting at Kyle or the assaults on Kyle, yet the DA has chosen to file charges against Kyle for defending himself.

The police have openly abdicated their responsibility to protect private property and render aid to protesters, which had led good citizens like Kyle to step up and do the job the police are refusing to do. And for this, Kyle has now had his life destroyed by a “justice” system controlled by Democrats who have openly supported the riots and looting.

Send a message to those who would stand by and watch our cities burn.

Deputy DA Angelina Gabriele is the one who filed the complaint against Kyle. Her complaint reads like a joke compared to the actual evidence. Be sure to let those involved in the persecution of Kyle know what you think of their decision. You have a right to petition your government for a redress of grievances. Use it.

Please remember to share this petition after signing it. Facebook is blocking queries for Kyle. Sign up for Gab and Parler accounts. Avoid Google search censorship against conservative news sources by using DuckDuckGo as your default search engine.