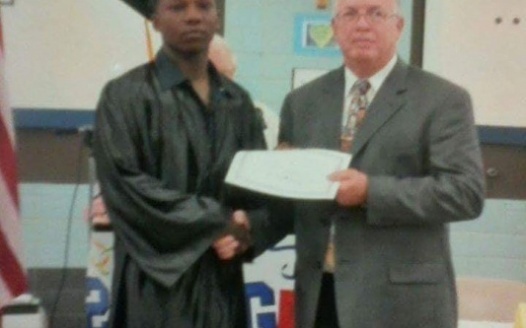 This is my son Dresvon James he is 29 years old he has been incarcerated since he was 16 years old unjustly tried, convicted and sentenced as an adult and was sent straight to an adult males prison where he has grown up from prison to prison and gone through many ups and downs, but this young man is a survivor he has been knocked down so many times but has stood right back up. He has gone through so much from being separated from me as a little boy finding out his little brother had tragically passed, being separated from his brothers and sisters for a little while ,thank God he was placed back with them, then finding out his father had tragically died, then getting caught up and not even understanding why to prison and then find out in prison his great grandmother died and now just finding out that he lost another family member and all of this has been over the years he has so far done about 11 years in prison and they're saying he has 10 more. I wasn't able to fight for my son 11 years ago because I was walking in darkness but God has spoke to me it's time to fight for my son. I will not stop by the grace of God until he's home. My son was over sentenced there was no evidence he was 16 years old handcuffed To A table naked and interrogated there was no attorney present, no adult and there was much much more wrong with this case he was a juvenile yet his adult co-defendant has long been released my son did not commit any murder and wasn't charged with anything as such, my son was used and I will no longer stand for this. Since my son has been incarcerated he has completed several programs gotten his GED taking college courses Bible studies and all he had a box of stuff that he had accomplished over the years which was destroyed in a fire where one of his siblings lost their lives just recently but I explained to him that was just paperwork nothing can ever take away or destroy the fact that he did all of those positive things throughout the years and I am so proud of him#free myson i would like this petition to reach the mayor of Louisianna