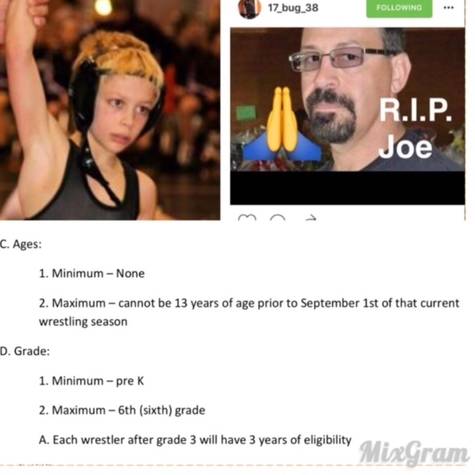 ITS OVER - BUG is Free to wrestle!

THANK YOU SO MUCH - TO EVERYONE WHO SIGNED THE PETITION, SENT AN EMAIL OR A MESSAGE. BUG IS FREE - HE CAN WRESTLE! LOOK OUT!

Dagen Condomitti AKA Bug is a 12yr old wrestler from Northampton Pa. He wrestles for the Northampton Athletic Association in the Valley Elementary Wrestling League. In 2014 Dagen won the 58lb VEWL Championship. Following that season as parents we decided to have Bug repeat 4th grade. He was very small (58lbs), young for his grade and felt it was the best for him at the time. The VEWL has a league rule stating that you are only allowed to wrestle 3 yrs after 3rd grade. The rule was because one coach was consistently having wrestlers repeat 6th grade. Because of this rule Dagen didn't wrestle in the league for two yrs. He focused on club wrestling and national dual competition. Then May 25, 2016 Joe Sommer Jr his NAA youth coach was tragically murdered. Bug immediately decided he wanted to go back to wrestle with the school team. His goal is to WIN the VEWL Outstanding wrestler award at the end of season tournament to honor his Coach Joe Sommer Jr. He has been practicing with the team for weeks, & his name has been on the roster since day one. This past weekend he wrestled in the first preseason tournament - apparently there are a few dads who aren't happy we're back. Now, these coaches and parents are trying to have Bug banned from the league. He is only 12, he isn't the oldest wrestler in the league, he will not turn 13 until next summer, he has only wrestled 1yr since 3rd grade. The rules are clear & we comply, yet the VEWL is still considering banning Bug. We are asking for everyone to sign our petition in support of Bug. Let him wrestle! #freebug!