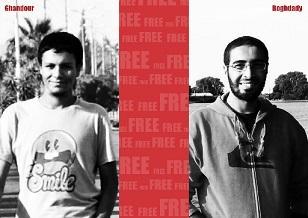 646 people have signed this petition. Add your name now!

It's been four months.
Four months since they were plucked off the streets simply for voicing an opinion other than the one the government held. AUCians Abdullah Ghandour and Abdelrahman Boghdady have been detained by the current regime under ridiculous charges such as 'blocking traffic'. As trial after trial gets delayed and postponed, our fellow members of the AUC community, our fellow students and Egyptian, are not only missing the semester but their entire lives put on pause. And that, of course, is only the minimum damage done.

Abdullah Ghandour is a computer science major; Abdelrahman Boghdady is a mechanical engineering student. Both were active members of the university community and both have been unjustly detained and stripped of their rights.

We ask that you sign this petition as the simplest way to show that you reject unjust arrests and want the boys home.