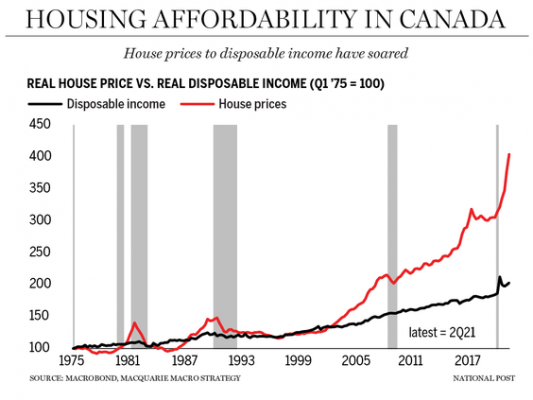 Our group goal is to force political change by creating a voting base significant enough to influence the outcomes of the next federal election.

Canadian home prices are off the rails, and as of January 2022 Canadians simultaneously face the lowest investors of homes for sale in 30 years AND the highest rate of inflation in 31 years.

Home prices have historically been in a bubble in large metropolises such as Vancouver and Toronto for decades, however thanks to the government's decision to pre-emptively cutting interest rates three times in March 2020 leading to the lowest 5 year fixed mortgage rate ever seen in Canadian history. Simultaneously, the government created the CERB (Canada Emergency Response Benefit) which paid out vast amounts of taxpayer moneys totalling $81 billion, and leading to reports of significant hiring deficits and resignations. This all in the context of inviting 400,000 immigrants into Canada annually. In some Canadian cities foreign investors imported $100 million in cash within a 6 month time-frame, while studies have shown that even after 5 years in Canada more than 60% of investor-class immigrants reported no annual income earnings at all, while those that did reported earnings less than that of refugees.

Housing prices have skyrocketed accordingly. The average Vancouver home as of Dec 2021 cost $1.2 million dollars, and even small rural towns are seeing astounding price increases up to 30% annually. Nationally home prices rose 18.6% in 2021, meaning it would now take 74 months to save up for a downpayment at a 10% savings rate for the median pre-tax household income, double the 37-month average since 2000.

Canada's real estate prices are the most overvalued in the G7 - a stark contrast to the USA, where incomes have outpaced home prices since 2005. The residential mortgage debt to GDP ratio rose from 26 per cent to 68 per cent between 1981 and 2016. And to add fuel to the fire, Transparency International has ranked Canada at the bottom of the pack of all G20 countries due to its failure to meet G20 anti-money laundering commitments.

Despite political bravado regarding the need to fix the Canadian housing system little has been done to this effect. This group is intended to force political action on housing affordability.

Please sign this petition to inform Mr. Trudeau that you will be exclusively voting for a party that promises and upholds plans to the following actions:

- Facilitate and fast track the construction of new builds to match at minimum the number of annual immigrant arrivals (based on current projections that is at least 411,000 in 2022). This is not an anti-immigration stance, it is a measure to ensure that immigration arrivals will not adversely affect the livelihoods of Canadians in their rent or mortgage to income levels.

- Significantly limit foreign speculation by allowing only a single home purchase with a taxation rate of at minimum 30% for investors not residing in Canada. Additionally, ban home purchases made by non-residents for a minimum of 2 years as promised by the Liberal Party in the 2020 election.

- Implement rent controls while simultaneously implementing an empty homes tax nationally so as to prevent a reactionary removal of housing from the market by homeowners.

Our group goal is to force political change by creating a voting base significant enough to influence the outcomes of the next federal election.