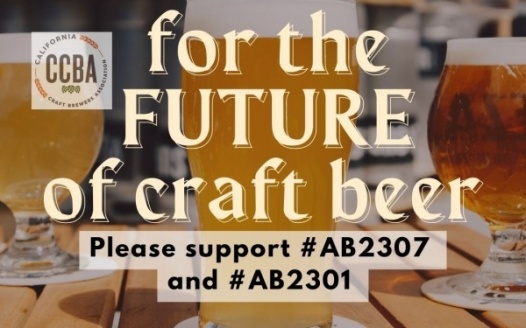 We are writing to you today to respectfully urge you to sign Assembly Bills 2301 and 2307 to update a handful of state laws that pre-date your service as our Governor but that limit breweries’ ability to become more sustainable small businesses and employers in their communities.

Craft breweries are a beloved part of California’s culture and tap rooms have become some of the most popular neighborhood gathering places in the last decade, often run by locals who hire locals.

Many breweries host trivia and book clubs, offer a family-friendly atmosphere, accommodate dogs, and provide stages for community performances. Tourists often seek out local breweries on their trips, often traveling out of their way for the sole purpose of patronizing a favorite brewery.

Craft beer is a rapidly expanding industry because of this success, with the number of California breweries having doubled in the last decade alone. Tap rooms and retail sales pump billions of dollars into the state’s economy each year. Yet, the laws on the books simply aren’t keeping up.

There are a couple of common sense updates to the law that will allow these small businesses to continue to serve the recreational and economic interests of the communities where they operate.

AB 2301 would simply allow breweries to deliver beer they manufacture to restaurants they own, removing what seems to be an unintended obstacle to brewers who also want to be restaurateurs. In some cases, brewers that own a restaurant a few blocks away are required to have their products travel several hundred miles instead of just down the street. We believe it’s common sense to cut the carbon footprint of craft beer by allowing this narrow exception.

AB 2307 raises the limit on the number of duplicate licenses a brewery can have from six to eight and expands the number of “bona fide” eating establishments a brewery can include with its tap rooms from two to four. AB 2307’s updated limits will allow a brewery that’s gained a foothold in its communities – and taken on a larger workforce as a result – to diversify its earning opportunities.

These little changes can make a huge difference for California’s brewing entrepreneurs. AB 2301 and AB 2307 represent a commitment to the future of craft brewing across the state.

Please join us in supporting the future of craft beer by signing these bills.