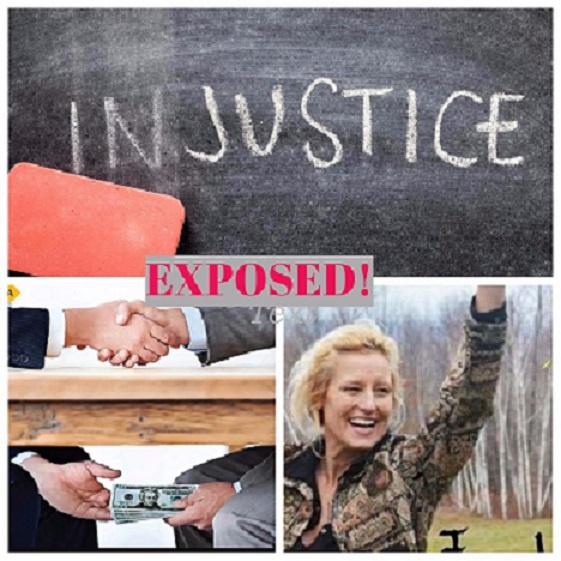 511 people have signed this petition. Add your name now!

WE ARE ASKING THE DEPARTMENT OF JUSTICE TO INVESTIGATE OKLAHOMA'S GOVERNMENT AND JUDICIAL PROCESSES.

Based on countless evidences and statements; there is proof beyond a shadow of a doubt; of HUMAN AND CIVIL RIGHTS IN OKLAHOMA CONSISTENTLY BEING GROSSLY VIOLATED for decades at least. It was never okay; but now it is to the degree that the state is more saturated than not from corruption from tampering with court records to many deaths unaccounted for; or pinned on a victim to cover up the state's crimes.

The success in obtaining outside investigations and prosecution of the offending parties; which will result in a Government/Judicial Reform in The State of Oklahoma, greatly rests on the signatures on this petition to accompany the complaint.

It has become clear that taking on corruption and collusion case-by-case is like climbing a mountain upside-down and backwards with cement blocks shackled on.

The solution to that problem is utilizing the power of numbers and joining all the victims, witnesses, and concerned citizens. With that, we will be in; for the first time - a position of strength. Being on OFFENSE, and outnumbering the corruption is a must!

EXAMPLES OF STATED AND/OR EVIDENCED DENIAL OF 'DUE PROCESS" and countless CIVIL RIGHTS VIOLATIONS AND LEGAL ABUSE, are as follows, but are not limited to:

-Awarding primary custody to a known and registered sex offender much more!

-Police/Prison brutality and much more!

- suppression of allowing a victim that might be in jail or prison to receive his legal paperwork or to properly defend himself or herself, resulting in obstruction of justiceAnd much more!

-Using inmates (allegedly innocent) for gambling "pleasure" through coordination of human "dog-fights." as a ritual of entertainment and much more!

-Denying medication and medical assistance in life-threatening matters and much more!

-Forcing dangerous fumes/substances upon citizens by restraining with shackles, chains, and other restraints and much more!

-Ignoring tribunal territory, laws and land rights and much more!

-Supression of testimony/Records and more!

-Judicial perjury and creation of false documents to justify or alter outcomes and much more!

-Blocking public criticizm on public websites and or social media to induce the public opinion to be one of favor, and much more!

-Collusion/Conspiracy through unlawful and pre-determined Orders or other legal outcomes and much more!

-Mutilaton of law and much more!

- Purposefully ignoring the application of law and much more!

-Bias to pro-se litigents and favor two attorneys and more!

-Denial of Due Process and much more!

-Conspiracy to deny Rights to disabled And much more!

-Abuse in the Courtroom and much more!

-Sex crimes and much more!

-Suborning of forgery/fraud/perjury and much more!

-Failure to protect the rights of those "injuured" in The State of Oklahoma by sworn officers and much more!

-Cover ups and set ups and much more!

-Failure to recuse upon clear conflict And much more!

-Creating false reports/evidence and much more!

-Denying of evidence and testimoy and much more!

-OBA denying citizens of their oath and ethical duty to protect the citizens and investigate much more!

-Attorney Generals both prior Scott Pruitt; and current, Mike Hunter, denying citizens due process due to the failure of Attorney General's office to act within their ethical duty to protect citizens and fairly investigate and punish/remove the offending and/or corrupt parties. Therefore, creating obstruction of justice and so much more!

- Sheriff's Departments and Police Departments denial of citizens/victims to due process due to the failure of these offices and agencies to thoroughly and fairly investigate, punish, and protect victims from abuse. Therefore, they too are guilty of obstruction of justice and so much more!

-Criminal threatening and so much more!

-Theft and so much more!

-Taking unlawful posession of one's assets and so much more!

The aforementioned are CONTINUED PATTERNS OF ABUSE THROUGHOUT BY THE STATE OF OKLAHOMA; and it's governing agencies including the judicial processes and more.

Given the magnitude of the past current and continued abuse by and through the state of Oklahoma, it's agencies and the judicial processes and for the purpose of self-interest and enrichment; is reasonable to call this conspiracy of collusion corruption denial of due process human and civil rights violations...ORGANIZED CRIME.

The State of Oklahoma by and through it's government and agencies continues to act in outrageous heinous and barbaric manners upon the citizens and other victims that find themselves in the snake pit of seemingly- the corrupt majority that are supposed to be protecting us and providing "Access to Justice".

**** THIS PETITION BY NO MEANS IS TO CLAIM THAT EACH AND EVERY GOVERNMENT OFFICIAL AND EMPLOYEE OF THE THE STATE OF OKLAHOMA IS INVOLVED IN THE AFOREMENTIONED ALLEGATIONS. IF YOU ARE NOT INVOLVED IN WHAT WE FEEL THE MAJORITY ARE; PLEASE CONTACT US CONFIDENTIALY AND BE READY TO SPEAK UNDER THE PROTECTIONS OF LAW FROM RETALIATON.IN ADVANCE, ANY CONVERSATION.. MESSAGE THROUGH THE FACEBOOK SIGHT "INJUSTICE IN OKLAHOMA EXPOSED" TO FURTHER DETERMINE A MEANS TO DISCUSS AND BE A PART OF EXPOSING INJUSTICE IN OKLAHOMA *****