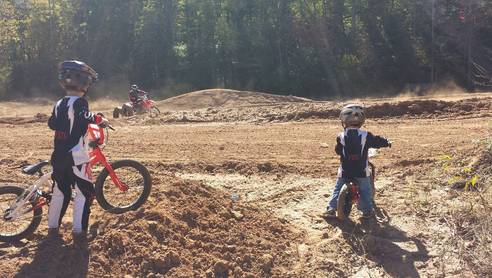 Sadly, Foothills Practice Track/Foothills MX (FPT) has come under attack! The track, located near Columbus, NC in Polk County, has been in non-stop operation since 1990 (25yrs).

FPT has supplied a fun and safe area for kids of all ages (4-75) to play. Motocross is a FAMILY ORIENTED SPORT. Publicly open practice tracks are not common place in this region, and FPT is critical in providing a place to ride dirt bikes for countless regional families and kids.

Thousands of riders over the years have traveled to FPT, bringing income to the local economy (fuel/restaurants/etc).

Since 2004 (11yrs), the track has adhered strictly to county appointed operational hours for visitors: http://foothillsmx.com/schedule/

The current complaints are easily refutable. A new neighboring property owner is insinuating the track:

- The track operational hours are publicly posted/advertised. Track is closed to general population (outside of property owners) outside of those hours.

- The complaining/neighboring property is both upstream and uphill from the motocross track. Simple physics combat this complaint.

3) Motorcycles are running without silencers.

- The validity of this accusation will rightly register as false to members within the riding community. Modern motocross bikes are designed to perform best with intact exhaust systems. There would be no reason for system removal.

WHAT CAN YOU DO?

We are asking for your help in signing/sharing this petition with the riding population as a means to show community support for FPT's continued operation.

Our next court hearing will be November 2, 2015. We are asking that you sign/share the petition and submit stories and photos between now and November 1, 2015. Our goal is to simply tell the story of what the motocross community is, and what the tracks we have access to mean to us. If you have photos of FAMILIES riding, kids of all ages, please send them to us via Facebook. We want to showcase that this is a family friendly, community connecting sport, that provides an outlet for kids to ride who don't participate in traditional sports.

THANK YOU FOR YOUR SUPPORT!