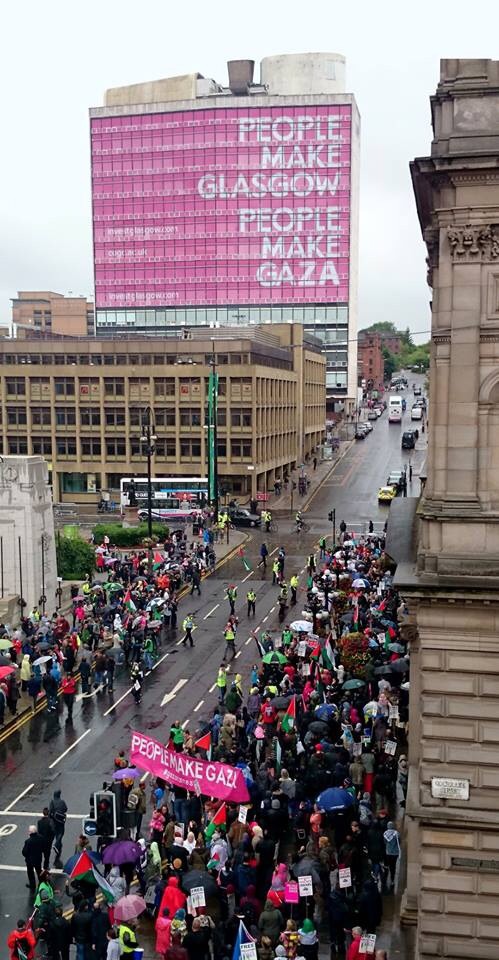 We the people of Glasgow demand the Lord Provost, the Leader of the Administration and the Chief Executive of Glasgow City Council exercise the authority vested upon them to hereby immediately raise the Palestinian flag over the City Chambers.

As the largest local authority in Scotland this symbolic gesture will show the world that as Glaswegians we recognise that almost 2000 innocent Palestinian civilians have been killed so far and more than 8000 severely maimed, many of whom have been innocent and helpless children. It will raise awareness of the deaths and of the disproportionate measure of the conflict. It will lend our support to the UN’s call for a ceasefire and an end to the conflict. It will remind the world the conflict needs to be resolved and the periodic killings of civilians must cease for once and all.

We should follow the exemplary decisions of our sister local authorities, like Dundee, Clackmannanshire and West Dunbartonshire,who are already proudly flying the Palestinian flag over their buildings. Even a few local authorities in England have adopted such a stance.

You are aware of the growing sentiment and solidarity which has been displayed in our City in the recent weeks with demonstrations and protests which have attracted over ten thousand people. This is more than indicative of the feelings people have for the conflict. This is the people of Glasgow calling for an end to the killings of innocent children. The people of Glasgow are calling upon you and the power vested upon you to lead and represent them and their sentiments which undoubtedly you too share already.

Gazans have been under siege for the last seven years living disempowered lives as virtual prisoners on their own land. Fly the flag to stop the inhumane treatment, the collective punishment, the slaughters, and the massacres. Fly the flag to let Israel know the world abhors the disproportionate measures of its aggression.