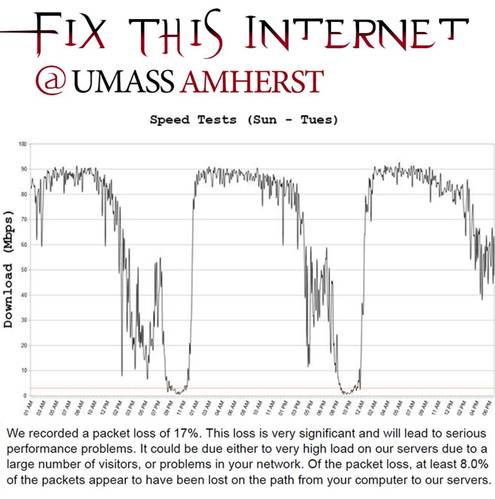 We payed an extra technology fee this year in our tuition, and our internet is worse than ever.

OIT doesn't seem to think this issue is that big of a deal and think not many people are complaining so let's show them how much we care!

Help us escalate this even further with this petition!

Update 9/26: Great news actually! We talked to OIT and they informed us that this issue is a top priority concern of theirs. We might see the first step towards change by Monday! They mentioned that this petition will help keep it on the radar (so keep signing away!) and the script graph and other data we showed them was very useful as well and should help escalate the process.

They mentioned the problem was that this year alone has shown a ridiculous 40% increase in devices with wifi capabilities, which basically overloaded DHCP server and it wasn't able to keep up with the number of IP Address leases requested and was sometimes snatching it from someone else or just giving you a very long wait time simply to get on the network. So yes, they were running out of IP Addresses, but they are working to fix that. My understanding in this area is a little lacking, but they said they moved the UMass network over to a NAT network, and if all goes well this weekend, they plan on using the NAT server to move many of the IP Addresses from UMass over to Eduroam on Monday. This should lessen the strain on the bottleneck'd DHCP servers and lessen the stress on the network as a whole. I am pretty optimistic about this so I hope there's a noticeable difference!

So basically this weekend if you're having troubles with Eduroam (especially Sunday since Friday and Saturday are generally fine since everyone's out partying), try switching over to UMass and if you're still having problems, log the time and day, your dorm area, and a brief description of your problem and send it to OIT or email it to anthony.laffan@umass.edu. Please be kind because Anthony is a wonderful person and surprisingly this already seems to be a top priority issue for them and some brave IT soldiers are working 14 hour+ days trying to solve this problem. It was really reassuring to hear.

However, this issue is not over until it is fixed, so cross your fingers and keep actively giving constructive feedback to OIT so they can hone in on what exactly to fix.

Update 9/29: OIT has posted an update! Check it out by clicking [here]. They also mention another [neat link in that article] for tracking their progress. Looks like we should start to expect some changes soon!

Thank you all for your cooperation. Don't forget to keep signing and sharing!

Update 10/4: We were invited to speak with UMass IT leaders (they informed us that they actually don't want to be called OIT anymore) and they informed us that they recently deployed some fixes, which seem to already have solved most of the issues! (Can we give them a round of applause?) Besides the occasional spike, the internet has been great for many people (if you're still having problems, let them know!). I just want to also go over some details of the meeting for those who were curious:

The problem was more complex than we first imagined:

They want to be more open with updates:

They're working on improving our experience:

UMass IT is actually awesome:

They still want your feedback:

There are more updates to come:

So far the internet looks great and I believe we have to give the IT staff a lot of credit for actually making a noticeable change. I'm sure they worked hard and it's great to have such a dedicated IT team at our University. Let's hope this continues. It can only get better from here.