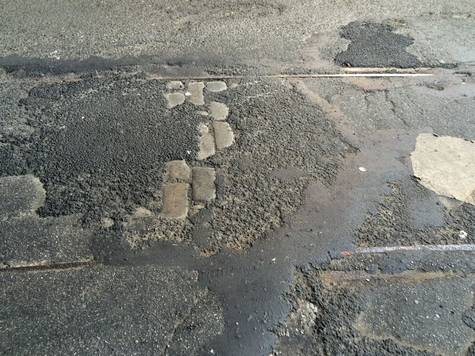 Let's all take action to get this crosswalk repaved. The crosswalk is located by Marcy Avenue and Broadway in Williamsburg, Brooklyn. It is covered in large potholes and is in a severe state of disrepair. I have seen too many people stumble and even fall crossing to get to the elevator or staircase of the Marcy Ave station on the J/M train. People with motorized wheelchairs, walkers, strollers and carts cross with great caution.

While the Dept. of Transportation makes superficial repairs, it is not enough because of the high traffic of buses and trucks that pass daily. You can even see the mark of Old Williamsburg come through, as the streets where once paved with cobblestones and lined with train tracks.

At night, its even more dangerous to cross. I have asked myself so many times "When are they doing to do something about this!" I realized that 'they' probably need to be made aware of the issue. So let's so just that!

Thanks So Much for Your Support!