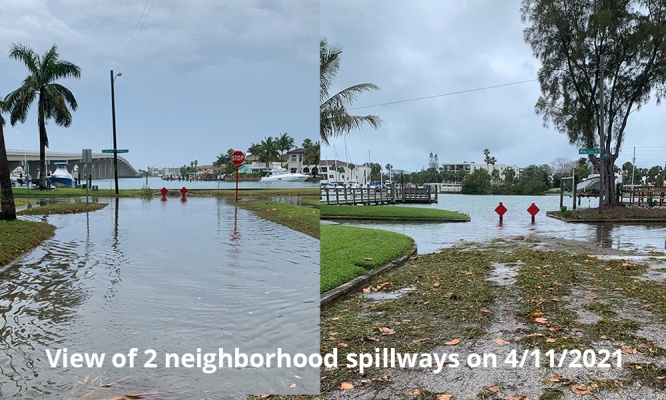 Stop the Tidal Flow! Urge the City of St. Pete Beach to Fix the Spillways in Don Ce-Sar Place

We, the undersigned residents and voters of Don Ce-Sar Place, implore the City leadership to immediately complete the planned work on the spillways in Don Ce-Sar Place (stormwater drainage, tide flex valves, and seawall reconstruction)** to prevent tidal flow into the neighborhood. The estimated time for completion of this work has repeatedly been pushed back, from August 2020 to, now, October 2021, even though funding was approved for this project in the 2020 budget. Maintenance of infrastructure to control flooding in our neighborhood has been a concern for decades; we ask the City to finally give it the overdue urgent attention it deserves.

DCPOC IS NOT COLLECTING DONATIONS FOR THIS PETITION AT THIS TIME!!

**In early 2020, the City adopted a flood control plan directed to prevent bay water flooding during increasingly high tides, focusing on seawall reconstruction and tide flex valve installation. Under this plan, the City targeted locations separated into five work efforts to avoid waiting on full design of all locations. In Phase One, in July of 2020, flex valve installation in outfall pipes began in locations 1, 2 and 3 (see below). Phase one still needs design/installation flaws to be addressed. In Phase 2, in August 2020, the City approved seawall and outfall structure rebuilding and flex valve installation in locations 6, 7, and 8, but, so far, nothing has been done in those locations, or in Phase 3 locations 4 and 5, where seawall reconstruction and valve installation have also been approved. For Phase 4, a preliminary design concept has been approved for installation of tide flex valves and baffle boxes at location F, which is controlled by FDOT. Phase 4 has been started but not completed. With respect to Phase 5, the City is aware of flooding vulnerabilities at the Don Ce-Sar Boat Ramp and road elevation changes or other infrastructure changes will likely be necessary to protect against future flooding scenarios, but no plans are being pursued at this time for this longer-term effort.

F Outfalls located along the Bayway