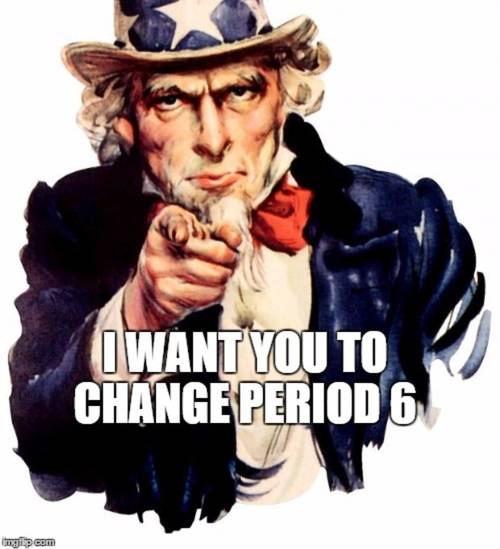 Westfield High School has recently changed its period 6 rules to deter students messing around after school. The rules restrict students from going to multiple classes during the sixth period as well as take away from the culture of sports teams by not allowing them to congregate before practice. Additional grievances include overcrowding the library and not allowing people to shoot in the MPIF. We believe that the entire rationale for making these new rules, the fights and students walking in the hallway, could be solved with a different solution other than punishing the entire student body.

Sign this petition to promote awareness and change these new rules.

UPDATE: Since this petition has gained so much momentum, I have went ahead and emailed Mr. Naas about it. I'll post further details in regards to things we can continue to do to change the rules. We may have to increase the goal for the amount of signatures.

UPDATE 2: We're going to increase the goal to 500 to generate more attention from administration.

UPDATE 3: I've sent an email to Dr. McGuire regarding this petition. I also updated the statement as this has become more serious. I've had no response from Mr. Naas so far. If anybody has any ideas regarding future actions with the petition, give me, Joe Day, any advice you have.

UPDATE 4: Dr. McGuire responded. It looks like she wants to meet up with me in the coming weeks. By the tone of her email, I doubt things will ever be back to normal. But she sounds like she will make some concessions, with things like be able to leave and change classes during sixtth period.