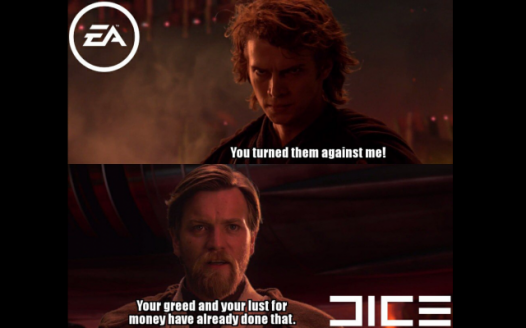 EA has cheated the gaming community for too long! It’s gotten progressively worse throughout the years, and loot crates are becoming fundamental parts of games. But this is where we draw the line! This is where we fight back! We will not allow EA to take our beloved game and throw it down the drain. We do not want our progression to be decided by an RNG loot crate system, and we most certainly do not want people who are willing to spend more money on he game to have a competitive advantage over us! As Anakin Skywalker once said, “This is outrageous! It’s unfair!” We refuse to receive credits based on how long the game lasts instead of how well we play! We refuse to play 40 hours to unlock one single hero! We are tired of your lack of comunication with your player base and we will no longer accept it! We will make you pay, EA! You make think that is an empty threat but if you do not fix this atocity immediately, we will not take action. Please, for the sake of the people who spend their hard earned money on your games, please fix your game and your broken loot crate system. The game from 2005 was the greatest of all time and it didn’t need loot crates. The gaming community will no longer stand for these increasingly insulting microtransaction systems and we will take action as needed. This is the first step of the long battle that we are going to fight for our gaming rights.