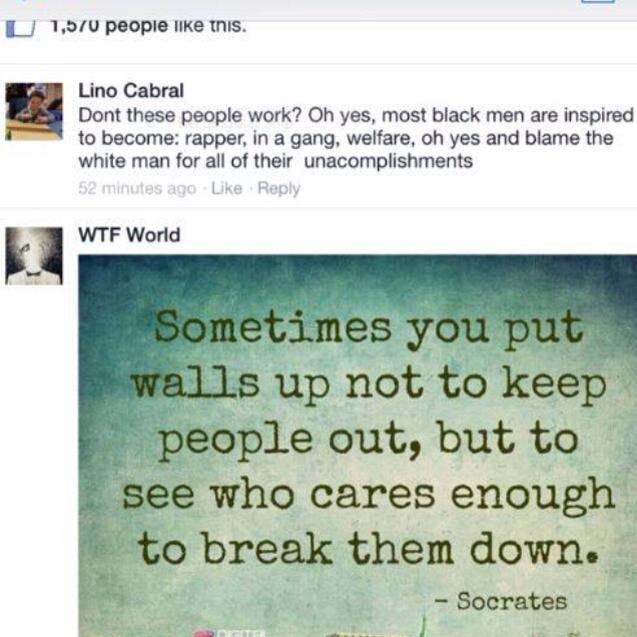 Your Community 0 Comments
304 people have signed. Add your voice!
11%

There seems to be a cover up of racist and violent comments involving a school teacher in New Bedford, MA.. The public needs to know about a New Bedford teacher whose recent Facebook posts are racist, threatening to youth of color and violent.

Lino Cabral spoke about using his .45 to shoot a “thug” who steps on his driveway. Does he view his students of color as “thugs”? Would he bring his .45 to school if he feels somehow disrespected? What type of early warning signs demand action to prevent potential massacres?

These posts are unacceptable behavior for a productive member of society not to mention behavior of a teacher.

Lino Cabral, who is described as a Math Teacher, Girls Varsity Coach and Track Coach at Greater New Bedford Vocational Technical High School, is quoted as saying the following statements over a Facebook conversation about a month ago:

"Don't these people work? oh yes, most black men are inspired to become: rapper, in a gang, welfare, oh yes and blame the white man for their “un-accomplishments"

"If we don't do something about this right now it’s just a matter of time before it happens here, shoot those mother (explicative)"
"Oh yes our president is doing what right now...sitting and watching...he's our (explicative) leader"

"u can't reason with thugs...my 45 is loaded and ready to go. A thug walks up my driveway one bullet would be going in his direction".

Is this how Mr. Cabral views his students of color? Are our youth in danger?
As residents of New Bedford and parents of students in the New Bedford Public Schools we are appalled by these statements and have urged Superintendent Linda Enos, Principle Franco and GNBRVTHS School Committee to investigate this disturbing matter.

Mr. Cabral is still a teacher at GNBRVTHS. In light of recent events, such as the racist terrorist attack in Charleston, South Carolina where 9 innocent people were shot by a white supremacist, you would think that the administration of GNBRVTHS would take the opportunity to publicly address this issue and not condone and cover up what consequences came from such blatant racist and violent comments.

What would it take to have Mrs. Enos fire Mr. Cabral? Maybe if he disrespected her directly or the school? There have been countless examples of employees terminated from their positions for speaking ill about their employer. Why isn’t Mrs. Enos or Principal Franco offended or concerned about the wellbeing of the students? What type of warning signs does it take to prevent a potential catastrophe like Charlston, South Carolina.

This sort of behavior should not be tolerated or condoned. Mrs. Enos and Principal Franco’s response seems to do just that. They should be held accountable and liable if Mr. Cabral attacks any of the students under their supervision.